By Dr. Oleg Kalinskiy, a 1998 graduate from Moscow, Russia

Oleg Kalinskiy, PhD, JD, currently works as Director for Government Relations for Uralkali, the top Russian and global producer of potash mineral fertilizer. He is also a Professor of Economics at the Moscow National Technological University for Steel & Alloys. He is the author of 10 books and over 90 scientific articles. In 1998, Oleg graduated Summa Cum Laude from Hastings College. At the time he was the first Russian student to ever intern at both houses of the U.S. Congress. In 2014 Oleg was a commencement speaker at Hastings College. He was awarded the Honorary Degree of Doctor in Laws and also the Young Outstanding Alumni Award by the College. Oleg and his wife Maria have two children (a boy of 6 and a girl of 4) and reside in Moscow, Russia.

This article is based on the lecture on the future of the Russian-U.S. relations given by Dr. Oleg Kalinskiy at Yale University on November 6, 2017, as part of the McMillan Center Russian Studies Program. Oleg asked for the honorarium to be directed to the Riley-Kalinskiy Scholarship Endowment Fund set up by the Family of Doug Riley in 1998 to help international students attend Hastings College.

A note from Dr. Kalinskiy: This article is dedicated to the memory of my mentor and my dear friend, Dr. Charles “Chuck” Evans who passed away on July 18, 2017. Dr. Evans greatly influenced in many positive ways my stay at Hastings and my subsequent life. An astute scholar of Russian-U.S. relations and history, he taught me to be open-minded and do what is possible to unite cultures rather than divide them. For this I am and will always be eternally grateful to Chuck.

In June of 1996, after my second year at HC, I was interning in the U.S. House of Representatives for the Nebraskan Congressman Jon Christensen. It was an interesting time.

After the first round of the presidential elections in Russia Boris Yeltsin took 35.28 percent of the vote, and the Communist leader Gennadiy Zuyganov took 32.03 percent. The second round was set for July 3.  Many experts in Russia and the U.S. feared that the Communists, who are usually more disciplined to vote, may win.

I remember how quickly the debate unfolded on the Capitol Hill with the main question directed at President Clinton by the 104th Republican dominated Congress: “If the Communists win in the 2nd round of the elections, who will assume the responsibility for losing Russia?” By “losing” the critics President Clinton meant for Russia going back to the Communist rule and becoming again a foe rather than a partner.

And now twenty one years later I believe the questions before U.S. are no less dramatic: “How did we, Americans and Russians, managed to lose each other as long term allies and partners? What is next: deepening division and isolation for many years to come or some kind of re-engagement and rapprochement?”

The latest disputes between Russia and the U.S. are known, and I do not want to recount them. The media is busy publishing the stories every day.

In my opinion, however, the daily negative news on the relations between the U.S. and Russia dislodges the importance of the longer term rethinking of the common agenda between the two countries.

At the moment on both sides of the Atlantic, politicians are too much engaged in playing the short-term zero sum game discarding the critical importance of solving long term global problems.

I am a proponent of the real politik approach which proved credible at times of severe crises in the international relations of the 20th century. It does not have to be the approach that is often associated by the historians and political scientists with Niccolo Machiavelli and his promotion of politics devoid of moral compass and principles.

On the contrary I think that without principles, no country can survive in the long term. However, in dealing with others, I think it is important to recognize that every country may be unique in its aspirations and goals. This uniqueness, however, should not be equal to superiority and it should not be erroneously confused with mandate to dominate and subdue other interests and agendas.

The non-zero sum game and its positive value for all involved parties, especially in foreign trade, have been outlined over many years by such great economists as Adam Smith, David Riccardo, Eli Filip Heckscher, Paul Samuelson, Bertil Gotthard Ohlin and others. In politics, the Nixon administration’s and Henry Kissinger’s, in particular, actions in the 1970s toward the Soviet Union (an unprecedented trade agreement between the U.S. and the USSR) and China (“shuttle diplomacy”) are good examples of non-zero sum game and of how reason and mutual compromise can become the basis for the cooperation.

I later witnessed Dr. Kissinger at the U.S. Congress arguing for the conditional extension of the Most Favored Nation (MFN) status to China in 1997 when I interned for Senator Chuck Hagel, who later became the Secretary of Defense in the President Obama’s Administration. The arguments of Dr. Kissinger were straight forward: “To change something — particularly, the human rights record in China — first, we need to engage with the Chinese, to find common ground, to agree to disagree and to move on the projects of common interest and applicability to both.”

Today I think that the decision makers in Russia and the U.S. need to do just this exactly: “agree to disagree” and move on.  In this regard, the joint statement on the situation in Syria by Presidents Putin and Trump at a recent meeting of APEC in Vietnam is a step in the right direction.

We have too many issues today that impact not just Russia and the U.S.; they are focal points for the whole world. The North Korean crisis, the war in Syria, the continued instability in Libya, acts of terrorism with the latest tragedy near the World Trade Center in Manhattan — all these problems are geopolitical in nature and are very much relevant to Russia and the United States. They should form the basis for the revived real politik approach between the two countries. 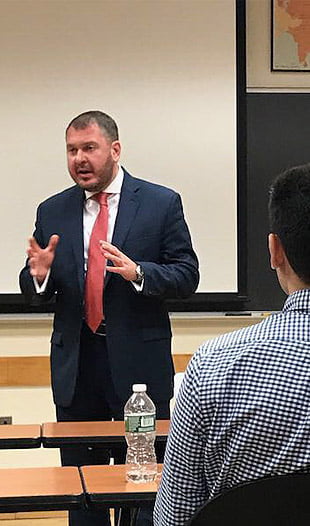 Further, we are also facing a serious issue of questioning sovereignty of existing states. When I was studying political science many years ago at Hastings College, my professors Dr. Storer and Dr. Evans always made a difference between notions of “state” and “nation” that I did not quite grasp at the age of 18. It has become clearer to me since then that people of one nation do not necessarily view themselves as citizens of the same sovereign state.

Catalonia is a good example. The Iraqi Kurdistan is another. “What may happen with Taiwan’s autonomy in the future?” is suddenly a question in both China and Taiwan in view of events in Catalonia.

The dichotomy of the territorial integrity and the nation’s right to independence and sovereignty is a major issue today and will continue to be for the foreseeable future.

The growth of the population and the distribution of this growth present another critical challenge. The United Nations experts forecast that by 2030 the population will reach 8.5 billion people, by 2050 — 9.5–10 billion people. The majority of the population will continue to live in Africa and Asia.  Are there enough resources to feed the increasing number of people? If not, where will they migrate, when and how? These questions are evident today already and are vital in many parts of the world. The quality and fertility of the soils, the deficit of water, the finite resource base, the climate volatility — these issues affect the Americans, the Chinese, the Indians, the Russians, the Europeans.  Everyone.

And we need to work on them together.

As Thomas Friedman stated eloquently in his publications: “The world has become flat a long time ago.”  The development of technology, the speed of the information exchange, the instant influence of events in one country on the situation in others are of paramount proportions.

This is why exactly we need to abandon the short-term opposing agendas on both sides and to explore the common areas of strategic importance. Recognizing and respecting the differences in positions and even ideology and yet again “agreeing to disagree.”

There is, of course, no need for everyone to adopt the same beliefs and ideals and to regard them as the only correct ones. In fact, this is a very dangerous approach to adopt that may make all efforts unsuccessful.

There should be no monopoly of beliefs and ideology pressed on each other.

Monopoly of ideas and beliefs never in history led to progress. And we all need progress and movement in the positive direction.

I came to the United States for the first time at the age of 15.It was in 1992 and it was the time of euphoria and almost unconditional trust in the relations between Russia and the U.S. The American people met me then with sincere interest and respect. Twenty five years later, the media and the politicians may tell you that the two countries are at the lowest points of the relationship.However, people in the U.S. still meet me with sincere interest and hospitality. This shows me that we are not, as people, in the lowest phase of our relationship. And we should be the proponents of the balanced approach to our relations via compromise and mutual respect for each other.

On Nov. 14, the Pushkin Institute Center of Russian Language and Culture was opened at Hastings College by the representatives of the Pyatigorsk State University, the partner university of HC in Russia. I helped set up the student and faculty exchange program between these two universities more than twenty years ago.In fact, I am a graduate of both.I am very happy to see that the cooperation is thriving.This is exactly what we need today between educators, students and faculty.

Because of many American people, I was able to receive a solid education at Hastings and benefit from so many experiences that I will never forget.

I made lifelong friends with many Americans.My close friend, a successful entrepreneur named Doug Riley, recently traveled with me to hear me speak at Yale University on the future of the Russian-U.S. relations.

My visit to Yale became possible due to another good friend, Professor Tom Graham of the Yale University’s Jackson Institute for Global Affairs, a well-respected scholar of the Russian-U.S. relations and a diplomat of the highest caliber. People like Doug in business and Tom in diplomacy and politics are so much needed today to help improve the relations between our two countries.

I am a Russian, a citizen of the great country where I live with my family. And knowing Russians and Americans I can clearly state: we are not adversaries; we have more in common that apart, we are more alike rather than dissimilar.

The time has definitely come to rebuild the Russian-U.S. alliance based on the common interests and to start untangling the critical problems before it is too late.