Serving justice runs in the family for Liebsack

Almost her entire life, Hastings College senior Stephanie Liebsack has known she wants to be a police
officer. “My parents were both police officers,” she said. “Just hearing all the stories over the years, it’s just kind of always been my focus, to be a police officer, and there’s just some kind of excitement that it brings me.” Working her way towards that goal, Liebsack is majoring in sociology with an emphasis in criminal
justice. She is currently looking at the University of Nevada, Las Vegas for graduate school where she can
get her master’s degree in criminal justice. 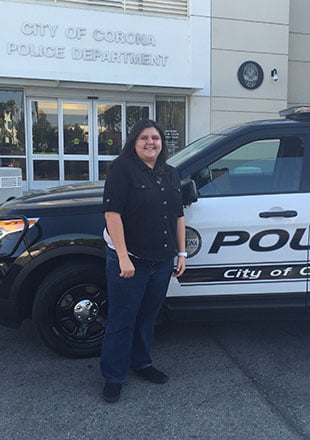 There, she would be closer to home, which is Corona, California. “Growing up in high school you’re pretty much stuck in your own world, and then coming to college and learning about sociology, you learn that there’s just so much more about life and how people live it,” said Liebsack. “I’ve learned that sociology is actually very important to the criminal justice system and how it works.” After graduate school, she hopes to join a police force like the Los Angeles Police Department. Liebsack doesn’t want to be involved in a small town, she would rather be part of something big.

This summer, Liebsack was able to see exactly what it is like to work as a police officer as an intern at the
Corona Police Department, where her parents used to work. While there, she filed papers, entered data
into the computer, observed dispatch and the front desk and got to attend her first ride along in a police
car. She was able to gain some first-hand experience by working at the department, especially during
the ride along.

During this 12 hour shift, Liebsack got to ride in the front of the police cruiser with a suspect on a felony
arrest warrant in the back of the car. At another time during the ride along, they flipped on the lights
and ran through a red light to pull someone over. “It was an adrenaline rush,” Liebsack said. “The police officer I went on the ride along with really taught me some key points about being a police officer and the things you have to look for and be observing while on the job.”

Not only is she following in the footsteps of her parents with her career, but Hastings College was also a
clear choice for Liebsack because Hastings is where her dad grew up. “We have relatives out here and it was a good opportunity to move out of California and come back here, and the scholarships helped,” she said. “I can’t afford a California school. With scholarships here, I was able to come out and play golf and in California, I wouldn’t have received any scholarships.”

Liebsack feels that since coming to Hastings College, she is more prepared for her future and the path
ahead with graduate school. “Before I came I didn’t really have a good scope on the social issues of the world and being a sociology major d learning from Dr. Logan has really taught me to think deeply about these issues,” she said.