Coral colonies, including the Great Barrier Reef, are dying across the globe, and scientists from around the world are working to discover the reason behind and solution to the coral crisis. One Hastings College wildlife biology major seized a summer research opportunity to join the cause. 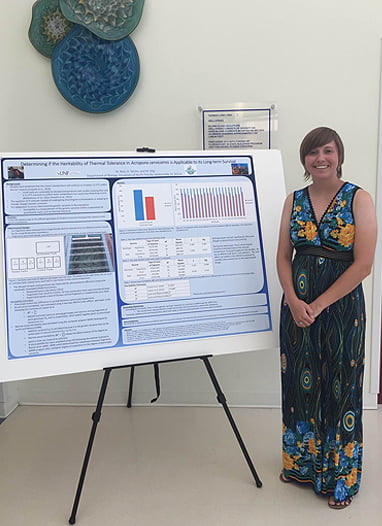 Michelle Ross, a junior from Columbia, Missouri, spent her summer in Florida assisting Dr. Matthew Gilg and his graduate research assistant with research about coral’s adaptivity to temperature changes.

Ross learned about the opportunity after her academic advisor, Dr. Amy Morris, forwarded on an email from Gilg. A 1994 graduate of Hastings College, Gilg was looking for students to fill a Research Experience for Undergraduates (REU) position.

“Dr. Gilg sent me a flyer and informational packet about that REU and said that he would love to see applications from Hastings College,” Morris said. “From there, I just forwarded it to a couple students who I knew would be looking for summer research experiences because they had already talked to me about ones or asked me already for a letter of recommendations; I knew that Michelle was looking specifically for a research opportunity, rather than an internship or shadowing experience.”

Ross submitted applications for several REUs, and was accepted into Gilg’s program for her summer research experience.

Getting Acquainted to Staghorn Coral

Over the course of the summer, she investigated how changing water temperatures affect Staghorn coral, a threatened species. She also helped with tests to determine if any genetic components could contribute to the coral’s adaptation to temperature changes.

“Global warming is an issue, and the trend that we are seeing is that water temperatures are increasing overall,” Ross said. “Unfortunately coral have a very low tolerance toward that. Studies have shown that even a one or two degree increase in the water temperature can lead to bleaching.”

The REU began in the Florida Keys as Ross worked alongside Gilg’s graduate research assistant to measure the photosynthetic efficiency of live coral submerged in water of different temperatures. Later, Ross returned inland to the University of North Florida to run genetic tests that would determine whether coral was capable of passing adapted traits on in generations. 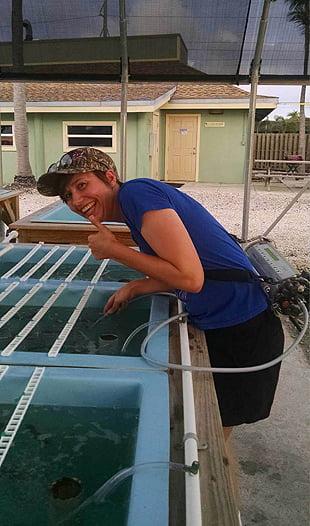 “A lot of the stuff I actually had to teach myself, and then apply it,” Ross said. “I had never done a lot of the lab tests and procedures before, and I’ve never used some of the specialized devices before. I definitely learned a lot and got a lot of hands on experience.”

Though Ross had to learn her way around the more specific parts of the coral research, her Hastings College experience prior to the REU left her well-prepared to dive into a real world research project.

“Hastings College focuses on research introducing students to the lab as early as their first year at the college. By their second semester, they are doing mini projects in lab that require them to collect and analyze data and write a lab report about it,” Morris said. “Even after their first year, students have a sense of how science and scientists work.”

The organization of the Hastings College Biology Department establishes a standard of quality work and dutiful work ethic, and Ross attributes the expectations of her academic department with providing part of the tools she used both to get and to succeed at her REU.

“I definitely am grateful to the Hastings College Biology Department in general for having such high standards. I probably wouldn’t have gotten this internship if I hadn’t been taught to push myself,” Ross said.

Looking into the Future

Ross was unable to see the research to its official end due to overlap of the new academic year, but she left Florida with a general understanding of what the overall research suggested.

For Ross, the future seems much brighter than the possible fate of the coral.

“What I’ve learned from all of my experiences is that a lot of people fall into passions related to wildlife biology just by accident. They just started doing something they loved and it just clicked, and now it’s their life,” Ross said. “The main thing career wise is that I want is to be outside, but the future is wide open.”

Ross plans to apply for a graduate program in pursuit of a masters degree after she obtains her bachelor’s in Wildlife Biology from Hastings College in the spring of 2018.