After spending the summer as a press intern in the office of one of his home state senators, Nick Musgrave returned to Hastings College with a much more clear image of what he’d like his future to look like.

“This summer really solidified my strong desire to go back to Capitol Hill and work as a staffer,” Musgrave said. “It really reinforced that I want to go back to Washington D.C., and if I do go back to D.C., I think I would want to work in government and in public service.”

More than a menial internship

Though only technically an intern, Musgrave’s responsibilities closely reflected those of permanent staff members. 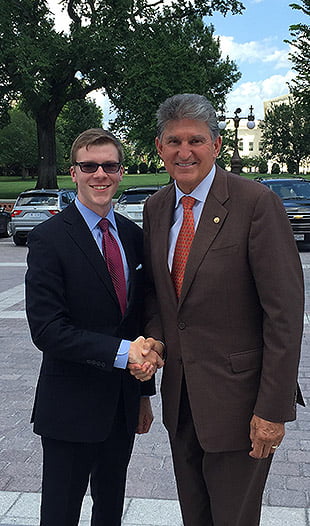 “My job was to help the press team in any way I could. Any help that the other press intern and I could give them was invaluable to them,” Musgrave said. “We weren’t just sorting mail; we were actually helping them do real work because everything the interns didn’t do, the press staff had to do.”

Musgrave spent most of his days compiling clips of any mentions about Senator Manchin that had been published in video media, as well as writing and publishing news and grant releases. Once a week, he compiled a weekly interoffice memo that summarized the most important news items happening in the state.

Musgrave’s favorite part of his summer came during the moments when he was able to try his hand at something other than his day-to-day tasks.

“I was able to write a few substantive, policy-based op/eds as a press intern, and that was the most fun part of my job. Not only was I writing about what we had been doing, but I explained the exact policies we implemented, how those policies would help people and how we’d been acting on them. It was the most interaction I’ve had with the legislative side of working on the Hill, and that was really exhilarating.”

Exploring policy through op/ed pieces was so exhilarating for Musgrave that it inspired him to dive further into policy. The senior plans to incorporate policy in his senior seminar project by exploring hot button issues more in depth.

“I wrote two op/eds, and they were both on the passage of the Comprehensive Addiction and Recovery Act of 2016 (CARA). Because of that, I got really interested over the summer on fighting what is really an epidemic of overdose by prescription opioids and heroin in West Virginia and central Appalachia,” Musgrave said.

CARA was passed during Musgrave’s time on Capitol Hill, and prior to the summer’s end Musgrave got the chance to visit a recovery clinic in Huntington, West Virginia, and really see the reason behind the legislature’s enactment.

“It really psyched me up and got me excited for my senior seminar project; it’s something I truly care about, but I probably wouldn’t have chosen if I hadn’t had my internship,” Musgrave said.

“I worked with interns from very prestigious private institutions, and as a Hastings College student, I was just as prepared to succeed in my role over the summer as the kids from Ivy Leagues,” Musgrave said. “More so than anything, both my history and my political science majors really helped me in the sense that I was able to critically think and write well under deadlines.”

Musgrave will spend his last year at Hastings College preparing to embark on his next journey in politics. The senior plans to go to law school in the D.C. area to earn a Juris Doctor degree with a master’s in public policy, ultimately hoping to return to the “seat of government.” Until then, Musgrave will continue to gain skills at Hastings College that will prepare him for whatever his future may hold.

“Hastings can really prepare you for anything,” Musgrave said. “I always kind of knew that, but working in D.C. and being exposed to the professional world has really reinforced that it’s true.”