Passion to work with low-income youth has become reality

Lauren Slaughter graduated from Hastings College in 2012. With a degree in Political Science and Sociology, she has worked for the Maryland Living Center in Hastings, Teach for America and is currently a case manager at Central Community College (CCC).

“I like working with impoverished or low income populations so I just found different jobs that allowed me to work with them, I guess in different capacities,” said Slaughter. “All three have been really different but they’ve all worked with the socio-economic class of the poor.” 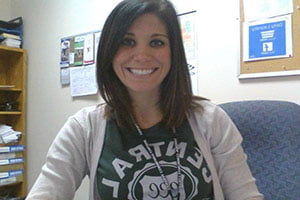 Slaughter also said that there were a lot of internship and volunteer opportunities through the political science and sociology departments while she was a student at Hastings College. “It helped me get out in the community and practice some of those different roles and see different jobs,” she said.

While attending Hastings College, she volunteered for Court Appointed Special Advocates (CASA) during her junior and senior years. Through her volunteer work, Slaughter knew CASA was trying to start a new project, which she worked to get grant funds for. At the end of her senior year, Slaughter said she applied for those grant funds to pay her so that she could be the one to start the new project, which is now known as the Maryland Living Center, a transitional living home for homeless youth.

“When I first got out of college I worked at the Maryland Living Center,” said Slaughter. “I was the program director there and actually started that program. It didn’t exist before then.”

Slaughter said the Maryland Living Center seeks out homeless youth that are 16-21 years old who are either homeless or couch surfing. Once they are in the program, the Center puts them in an apartment for 12-18 months. The program gives participants employment skills, gets them enrolled in school, teaches life skills like budgeting and cooking, “basic things that most parents teach their kids but most of the youth—because they don’t come from typical families—don’t have that kind of training,” she said.

After her time at Maryland Living Center, Slaughter was offered a job with Teach for America, a nationwide organization that recruits, typically, recent college graduates at the top of their class to work as teachers in low performing schools in impoverished areas, said Slaughter. “I was just outside New Orleans, Louisiana, in a very, very poor neighborhood.” Slaughter said teaching 5th grade ELA (English Language Acquisition) and Social Studies for about a year and a half.

In November 2014, Slaughter agreed to move back to Nebraska in order to work for CCC, where she is now a case manager. Originally from Denver, Colorado, Slaughter said she was homesick. “I was not a huge fan of living in Louisiana so I wanted to come back to the Midwest,” she said.

For Slaughter, being a case manager means meeting with students to make sure they are getting the support they need in order to succeed. Slaughter said that a lot of the students she helps are from low income households, some are not working, others are making minimum wage, some are single moms or English isn’t their first language.

“Sometimes paying for gas to come to campus is hard so we’re able to help them with transportation assistance, or getting scrub uniforms if they’re Certified Nurses Assistants. We also help get them tutors for classes if they’re struggling academically,” she said. Her job is to make sure that the students are attending classes, getting their work done and to see if they need any help.

By Amanda Miller, a senior from Woodland Park, Colorado, majoring in Journalism.