New path takes Delgado to Europe, helping those with disabilities

During senior year of college, most students spend time searching for graduate schools or careers. For 2015 Hastings College psychology graduate Jocelyn Delgado, this wasn’t the case.

Unsure of what to do, Delgado took her concerns to Dr. Dan Deffenbaugh, professor of religion. He agreed that both graduate school and a career didn’t seem like the right options for her. 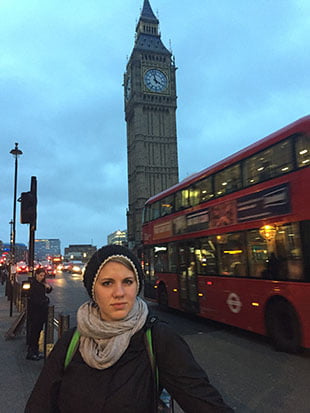 “I told him that I wanted to live outside of the U.S. and that I had a lot of experience in working with people with disabilities and it was an area I’d like to continue in if I could,” Delgado said.

As well as working as a care provider for three different people with disabilities and taking on the role of a behavioral therapist for a child with autism, Delgado has also spent three summers at Colorado Lions Camp (CLC). Located in Woodland Park, Colorado, Delgado served as a counselor for two summers and program director for a third. CLC is dedicated to serving both summer and winter programs for people with developmental and physical disabilities.

“Those were all three perhaps the most challenging summers of my life,” said Delgado. “We worked with campers of all ages, with mainly cognitive disabilities, between eight years old all the way to 74 years old. We did have a week for the vision and hearing impaired.”

Because of her experience, Dr. Deffenbaugh suggested a program for Delgado called L’Arche, an international nonprofit organization that supports people of various abilities, cultures, ages and religions to live a meaningful life together.

L’Arche is a program that exists in all areas of the world; the United States, Canada, Africa, Ireland, Austria, Spain, Syria, Japan and more. Dr. Deffenbaugh supplied Delgado with contacts of Hastings College alumni who had joined the L’Arche program in New Zealand.

“He gave me their contact details and I spent quite a bit of time talking to Tim Moore (‘07), who is now the Community Leader at the L’Arche Community in Georgia,” said Delgado. “Tim provided me with the answers to almost all of the questions I had and put me in contact with two women who had worked in L’Arche in the UK and Ireland. I knew after one phone call with Tim that L’Arche would be perfect for me.”

Delgado began as an assistant at L’Arche in Ipswich, England, and was soon promoted to the role of house animator, after originally intending to only stay a year.

Delgado is responsible for supporting the registered manager in developing a house where those with learning disabilities (core members) and assistants live together. Managing a team of five assistants (including herself), Delgado and the team oversee the care of three core members in their house.

Assistants support the core members with all aspects of daily living. Working with families, social workers and the L’Arche community leader, Delgado ensures those with disabilities are provided with the best care possible.

“As core members are independent in personal care needs, a lot of our focus has been placed on supporting them to pass through to the adult world. We assist these adults with things like doing their own cleaning, laundry, planning a menu, cooking, budgeting, making and visiting various medical appointments, shopping, gift giving, relationship building and more,” she said.

Although every day is a challenge with the care that needs to be provided, Delgado feels that she has been affirmed in her leadership and that she’s been able to make deep relationships with those she is living with and caring for.