Ministering ‘to and through’ coaches 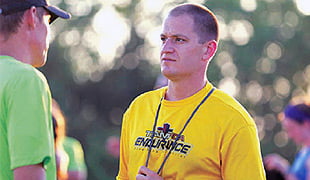 Josh Reynolds ’00 serves as the Central-Northeast Nebraska Area Director for the Fellowship of Christian Athletes (FCA). For the last 10 years he has worked with FCA, and Josh said, “I love my job and could see myself with the FCA for the rest of my life.”

Originally from Lexington, Neb., Josh said he got plugged in right away when he came to HC. “I played football and was involved in several different organizations, including the Fellowship of Christian Athletes,” he said.

As a first year student and sophomore, Josh said he didn’t really have any idea what he wanted to do career-wise, so he focused on what he did enjoy, and what made sense to him. “I finally settled on psychology and religion classes,” Josh said. “I really didn’t know where that would lead, but had an interest in helping people. As a Christian, I knew I wanted to be serving in a ministry.”

In looking back at his studies in psychology and religion, Josh said that he gained more from the actual learning process and relationships he developed along the way than from the content he was taught. He was forced to be disciplined in studying, reading, writing, thinking and engaging the world around him. “I think that’s the beauty of Hastings College. I grew most from the relationships I devel­oped, discovering my passions and learning how to lead and serve in the world,” Josh said.

Working through the FCA has given Josh the opportunity to combine two of his greatest passions, sports and his faith in Jesus Christ. Being part of the largest sports ministry in the world, his mission is to minister the gospel of Jesus Christ “to and through” coaches. “A coach is the most influential person in our cul­ture today,” Josh said. “FCA’s purpose is to come alongside coaches – to coach the coach.”

By reaching out to middle school, high school and college coaches in Central Nebraska, Josh hopes to help coaches develop from being “transactional coaches” into “transformational coaches” who truly impact the lives of their athletes and maximize their athletic performance.

“Every day I see the lives of athletes, coaches and all whom they influence being transformed as a result of their involvement in FCA,” he said.

By Amanda Miller, a junior from Woodland Park, Colorado, majoring in journalism.