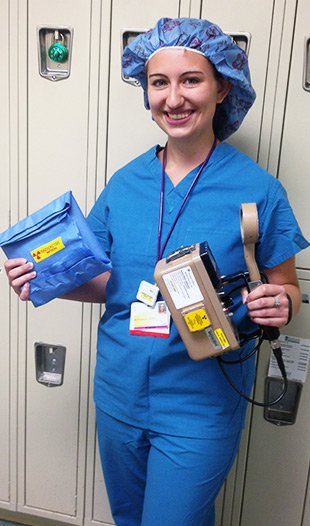 After taking the Advanced Laboratory class during January Term, or J-Term, at Hastings College, Morgan Killefer learned how to apply her major to a career.

A senior from Corvallis, Ore., Killefer is majoring in Physics and minoring in Biology and Math. Her goal is to enter into the field of medical physics where she can create and double check plans in radiation oncology. As a medical physicist, she would calibrate equipment to insure proper treatment to patients and perform brachytherapy treatments.

One of the reasons Killefer said she chose Hastings is because the college supported her goal of combining physics and biology. According to her, there were many colleges that wouldn’t allow it.

“I also just really liked the small class sizes and Hastings College had a way that I could tie physics and biology together and do both, whereas a lot of other schools didn’t recommend tying them both together just because it would be too big of a work load,” she said.

Coming to Hastings also gave her the opportunity to discover the field of work that she wishes to pursue. “Had I not gone here, I probably wouldn’t have found out about medical physics,” said Killefer.

In the summer of 2014, Killefer landed an internship that gave her the experience she needs in order to fulfill her career goals. After receiving a fellowship from the American Association of Physicists in Medicine, Killefer spent her summer at the University of Maryland where she worked directly with physicians.

“They selected 11 people from across the country and we got to choose from a list of places where we wanted to go to study physics for the summer,” said Killefer. “They had places everywhere, from the University of Chicago to John Hopkins, and I chose to go to the University of Maryland.”

From her internship, she learned what to expect with her new-found career choice. Killefer also said it was emotional at times, seeing young children who had their whole lives ahead of them, and even older patients who had a shorter life expectancy. She enjoyed learning about medical physics, and knows that there aren’t many places that provide this kind of work.

“There are not a whole lot of programs for medical physics in the world,” she said. “Most of them are in the United States but there’s one in Korea and a couple in Canada and that’s about it. It was a good way to experience and decide that’s really what I want to do.”

Right now, Killefer said she is working on graduate school applications and she plans to get her PhD, which will take about five years. After that, she will go through a two-year residency period, and then she can start applying for a Junior Medical Physicist position.

By Amanda Miller, a junior from Woodland Park, Colo, majoring in Journalism