When you consider what an English major might do after graduation, working at a social services agency might not be the first thing that comes to mind. Aaron Bowen, however, has discovered that actually serving humanity is the perfect fit for a humanities graduate. 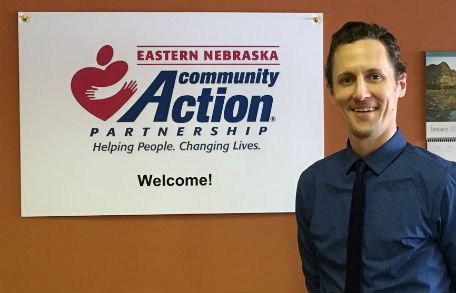 “I get to apply everything I’ve learned over the years—how to lead compassionately, think and write critically about tough issues, manage crises, develop the skills of my staff, and convince convince others that the fight against poverty is worth fighting every day,” Bowen said.

“Certain people and communities suffer greatly in our midst, but they also have so many strengths and resources,” Bowen said. “The task of Community Action is to devise and continually troubleshoot the formula for collaborating with these communities to create the best possible outcome.”

A career dedicated to improving lives

Bowen describes his work as two sides of the same coin. On one side, Bowen feels the constant need for work to be done, as there is always someone who could be helped or a situation that could be improved. On the other side, he acknowledges that there is something worth celebrating every day.

“The people who come through our doors are remarkable in their courage and resilience. The people who work in this field and stick with it are equally remarkable,” he said. “To see someone realize, too often for the first time, that he or she is worth caring about and believing in, assures me that we are contributing something powerful to humanity.”

After working as a Community Organizer in Albuquerque and Operations Manager at Crossroads Center, a rescue mission in Hastings, Bowen dedicated the last 11 years of his career filling a variety of positions, including Director of Head Start, at the Community Action Partnership of Lancaster and Saunders Counties in Lincoln. He was named ENCAP’s Executive Director in September 2016.

Bowen’s interest in social justice issues was piqued around the age of 15 when he became involved with Nebraskans for Peace. His time at Hastings College helped fuel his desire to work in the nonprofit field.

“Once at Hastings College I found a lot of people and professors interested in the same.Conversations with them gave me new insight and encouraged me to keep learning,” Bowen said. “After helping lead the Amnesty International Chapter at HC, I ended up doing the same thing at the University of Wyoming as a graduate student. All the while, I was an English major reading about poverty, discrimination, class warfare, revolution and the like.”

“Dr. Babcock knew me, and he knew that a trip like this would be a better fit for me than a more traditional trip abroad,” Bowen said. “Riding the train on my own from Bangkok twelve hours north, visiting hill tribes outside of the city, having to pick up as much Thai as I could to communicate and many, many other experiences still impact me today. Having come from the small town of Central City, Nebraska, the time I spent in and around Chiang Mai changed everything for me.”

This Hastings College graduate has been fighting to help the disenfranchised for years, and his passion is just as intense now as when he first began. For inspiration, he looks to the social justice leaders of the past.

“It was a revolution when Sargent Shriver developed the War on Poverty programs over 50 years ago,” Bowen said. “Give the poor a voice? Give them a role in changing their communities for the better Challenge the leaders and systems that perpetuate poverty? Doing these things matters now as much as it did then.”

by Jake Konen, a junior from Hastings, Nebraska, majoring in marketing