Nathan Mertens’ saxophone career has a distinctly international flair. Since graduating from Hastings College in 2012, he studied at the l’université Européenne de Saxophone in France during the summer of 2015 and has performed in Japan, South Korea, Hong Kong, Taiwan, China and England. Now, he is headed to Tokyo as the recipient of a prestigious Monbukagakusho Research Student Scholarship.

“I’ll be the first American saxophonist to formally study in Japan, and I can’t wait to begin,” said Mertens, who departs in April 2017 for a two-year research experience at the Kunitachi College of Music. “I will be researching Japanese saxophone performance and pedagogy trends, with an additional focus on linguistics and its effects on saxophone playing.” 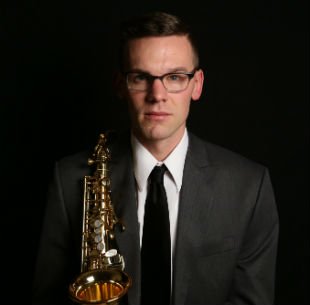 He credits the Hastings College Music Department for some of his success.

“Dr. Debra Rhodes was my saxophone professor at HC and has continued to be my mentor,” he said. “If it wasn’t for her guidance and support, I wouldn’t be who I am today. Additionally, the entire music faculty at Hastings College really had a hand in shaping my career as a performer, educator and artist.”

The Monbukagakusho program, established in 1954 and managed by the Ministry of Education, Culture, Sports, Science and Technology in Tokyo, offers scholarships to researchers, graduate students, and undergraduates from around the world.

Mertens was selected for the fully-funded scholarship after completing a lengthy application and an extensive review process. He also studied the Japanese language for a year at The University of Texas.

“I completed an interview at the Japanese Consulate in Houston, took diagnostic language exams in English and Japanese, received sponsorship from the Embassy, was accepted by a Japanese University and finally, approved by the Japanese Ministry,” he said.

As a researcher at Kunitachi College of Music in Tokyo, Mertens will work closely with famed saxophonist Masato Kumoi, soprano saxophone chair of the internationally-known Masato Kumoi Saxophone Quartet.

Off to a great start at HC

In addition to his music activities, Mertens was a Student Senator, a member of Alpha Chi scholastic honorary, a Homecoming finalist and a Who’s Who recipient.

“Hastings College taught me how to be a musician and a person,” he said. “Was I the greatest saxophonist when I left Hastings College? No, but with a great work ethic and sense of self, I was ready for the road ahead.”

by Jake Konen, a junior from Hastings, Nebraska, majoring in marketing