When Tanner Henning was tasked with creating a compound capable of detecting the presence of heavy metals in water for his summer Research Experience for Undergraduate (REU), he went above and beyond. In fact, the senior chemistry major created a completely new molecule, never before recorded by science.

“I used a single crystal x-ray crystallography to document the three-ligand compound I made,” Henning said. “It was the first known record of that molecule, and I was really excited when I learned that. I had made something that no one else in history ever had.”

The senior chemistry major explored inorganic chemistry at the University of South Dakota, where he investigated chemosensors, or compounds that help identify certain chemicals. Henning’s research build off previous work with chemosensors; however, his REU project focused on creating a new chemical receptor.

“Each chemosensor has a chemical-specific receptor; you can think of it like a pocket for the chemical to fit into,” Henning said. “We were trying to make a different type of pocket than anyone has before.”

“One property of the sensor is luminescence, and this is activated when the chemosensor’s receptor is filled. So basically the heavy metals get stuck in the sensor, which turns on the luminescent qualities and tells us that there are heavy metals in the water,” Henning said.

Once perfected, the chemosensor could be used to check local water supplies for hazardous materials, thus helping communities stay healthy.

Independence in the lab

Henning said he grew immensely as a chemist, thanks to the independence afforded to him by the REU.

“This research project was my own. I was in the lab, working by myself throughout the entire summer,” Henning said. “It was the first time I didn’t have a lab handout to walk me through the process, or Dr. (Moses) Dogbevia and Dr. (Neil) Heckman to ask what to do next; I had to use my critical thinking skills and figure it out myself.” 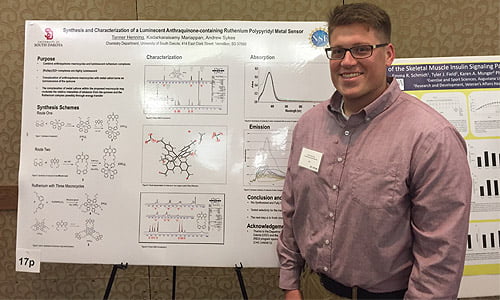 Henning conducted independent literature reviews to inform his research and build his background on chemosensor synthesis. Then, he applied the lab methodologies he had learned in his classes at Hastings College to the real-world lab setting.

The biggest test of Henning’s chemistry knowledge came on days when things didn’t go quite as planned.

“One day, I had just completed the synthesis for the compound I wanted — and then I dropped it, and the vial broke on the floor,” Henning said. “I was certain the compound I had spent a week trying to make was ruined.”

Henning allowed his initial frustration to settle, then evaluated the situation. Although he didn’t have any colleagues to brainstorm solutions with, he was able to find the answer by himself.

“After I thought about it, I remembered the solubility rules, which say you can use different solvents to dissolve specific compounds, but not others,” he said. “I cleaned up the sample on the floor and used multiple solvents to separate the impurities from the sample. I felt so satisfied because I saved the compound and my project!”

Henning has a special knack for making chemistry seem easy, but he didn’t always command his scientific talents so flawlessly. He floundered his first two years in college, often skipping class and receiving low grades. He said he entered his junior year without a concrete plan for his future.

Despite his poor academic performance and lack of direction, his professors at Hastings College did not give up hope.

“Going into junior year, Dr. (Amanda) Solem pulled me aside to talk about my biochemistry class. She had seen my GPA and how I’d done in my previous courses, and she recognized biochemistry was going to be challenging for me,” Henning said. “But she believed I could be successful in the class if I put in some effort. She even gave me a list of times she was available outside of class if I needed extra help.”

Henning soon discovered his professors were dedicated to helping him regain positive momentum in academia. One-on-one mentorship from the faculty set him back on track academically, and personal advising sessions with Dr. Neil Heckman, chair of the Chemistry Department, informed Henning about research and career opportunities.

“I’m really glad Dr. Heckman introduced me to the options available to me. I didn’t even know REUs existed until he told me about them, so without him I would not have known to apply for one,” Henning said.

In a single year, Henning’s grades improved, he landed a research-based internship over January Term and he was accepted to the competitive REU in South Dakota. He attributes his success to the attention he received from his professors.

“One of the biggest advantages of Hastings College is how your professors truly care about you and your education,” he said. “The faculty here went out of their way to help me. I just don’t see faculty at a larger institution doing that, especially with a student who might be struggling like I was.”

The mentorship Henning’s professors showed him inspired him to follow in their footsteps. Now in his final year at Hastings College, he reaches out to his younger classmates, encouraging them to apply for REUs.

Henning advocates for the advantages REUs can provides undergraduates. Real-world experience, professional independence and career networking are just some of the perks he sees as beneficial.

“REUs are sometimes more difficult to get into than grad school because there are more positions at grad schools, whereas funding is limited for REUs. If a student ends up applying for a graduate program, their application will look better with an REU,” Henning said. “Plus, that student will already have experience applying for a competitive academic program.”

For Henning, his REU served as a stepping stone to graduate school. He was accepted to the material science PhD program at Montana State University in January, where he intends to study material chemistry and solar energy.

He maintains a positive outlook for creating a future career in the growing industry of renewable resources — a success story he wouldn’t have known existed without his Hastings College mentors and his REU.