See a video interview with Hajny below.

A biology degree from Hastings College can often lead to a career in a white coat, as many graduates go on to become physicians, veterinarians and laboratory scientists; but others, such as 2002 graduate Kristy Hajny, don a helmet and fire-resistant clothes each morning.

Hajny is a wildland firefighter with the U.S. Forest Service, a job that requires significant mental strength but also physical stamina. Each morning while on the job, Hajny wakes up early, usually in a tent, and spends the next 16 hours in briefings, on hikes and fighting fires in the nation’s forests. Despite the grueling hours and strenuous work, Hajny wouldn’t have it any other way. 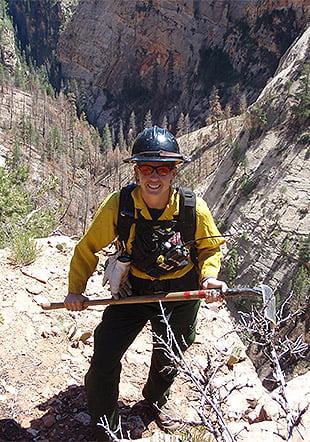 “I initially wanted to work as a park ranger, but found out early on that I prefer more active, hands-on work,” said Hajny. “I love what I do now, I often have what I call ‘magical moments’ when I pause and think how cool it is that I get paid to do this.”

Working predominantly in the Western United States, Hajny has fought and controlled big and small fires, from wildfires stretching for more than half a mile to controlled burns in isolated areas. Most of the wildfires are small, with single tree fires as a result of lightning strikes; but some, like a wildfire in 2009, can be much more dangerous.

“The worst fire I’ve worked on was probably in California along the Stanislaus River Canyon,” Hajny said. “The terrain was super rough, and we put it out by building an indirect line to the river bottom, which required us to traverse the canyon. It was super steep, hot and dry.”

Though the 2009 fire was mentally and physically challenging, according to Hajny it still wasn’t the scariest. Her most frightening fire was in 2012 in Idaho, as part of a team that was fighting multiple fires at once that quickly raged out of control.

“The fire moved from just a ground fire to a canopy run, which is an intense fire that stretches from the ground all the way to the tops of the trees,” said Hajny. “We had to evacuate quickly, and as we were hiking out, spot fires were forming all along our path. Thankfully nobody was seriously injured. Our lookout was great and was able to alert us in time.” 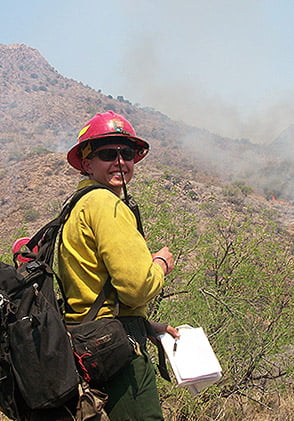 Though fighting wildfires may not be the most typical of career paths, it’s one that Hastings College helped prepare Hajny to pursue. She cites the College’s deliberate mentoring and well-rounded course requirements as major contributors to her success.

“At Hastings College, I was more than just a number. The faculty really cared about me as a person,” said Hajny. “My professors would often come to our basketball games and cheer us on, their support extended well beyond the classroom.”

It was also Hajny’s experience as member of that basketball team that has helped her along as a firefighter.

“Firefighting is similar to athletics, they’re both team settings where you’re expected to work hard,” Hajny said. “You either love it, or you hate it.”

As a female firefighter, Hajny is part of an elite group. Only about 12 percent of wildland firefighters are women, though Hajny is one of two females in her ten person crew. However, there are initiatives such as the Women-in-Fire Training Exchange (WTREX) that are trying to diversify the industry.

“Programs like Women-in-Fire help introduce more women into the industry, which is a great opportunity for all involved,” Hajny said.

For aspiring firefighters, either male or female, Hajny had the following advice:

“Pay attention in all of your classes, including those outside of your major. Advanced skills in reading, writing and essentially knowing how to learn will help you get ahead. Hastings College was able to give me such a well-rounded education that I can do just about anything.”