Fulbright experience: Stories of a Yabancı

“No, where are you really from?”

This is one of the more frequent questions I have been asked so far during my time in Turkey. It makes sense that in a patriotic country where portraits of a stoic-looking Atatürk, the founder of modern Turkey, hang in very nearly every building, the Turks, ever curious, want details about where one comes from. There is a strong perception that the lineage of all Americans truly began elsewhere, thus nullifying “America” as an acceptable answer to one’s origin (ignoring the history of the native peoples, of course). In other words, America can only be viewed as a very recent stopover in regards to your family’s history as a whole. 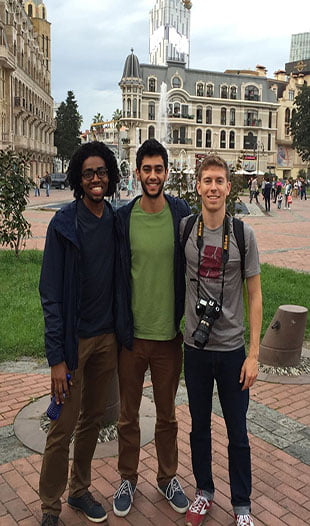 In the United States, this Turkish brand of curiosity would be considered curt (and more realistically quite rude). Inquiries into salary, marital status (and plans to marry if single), and religion frequently enter the conversation upon first meeting someone. That said, once one has become acclimated to the drastic reduction in privacy, this intense interest becomes flattering. In American society, where quick, superficial encounters are the norm, Turks are genuinely interested to know everything about you as an outsider.

Turkish hospitality is legendary. Recently, as we descended from a mountain hike, we struck up a conversation with a village woman who lived in the area. Within minutes, we found ourselves in her home with hot tea and a full meal in front of us. Other Fulbrighters have had infants abruptly placed into their arms by busy mothers while on the city bus followed with thanks in the form of an invitation to join the family permanently; this takes place in the span of 15 minutes.

Of course, the transition to the land of çay has not always been smooth. The perception of time and deadlines are vastly contrary to the United States. My roommates and I have more than once waited entire afternoons and evenings on mechanics and landlords who were set to arrive “in one hour.” Eventually we were informed that a “Turkish hour” is different than an “American hour.”

In Turkey, the statement “I’ll be there in an hour” could see the person arrive a day later. Or two. Or never at all.

In a more literal example, the Turkish government postponed the time change associated with Daylight Savings Time for two weeks with nearly no warning. Phones and computers automatically made the switch anyway, resulting in countrywide confusion and sparking the #saatkaç (what time is it) on Twitter.

Turkey is a spectacularly beautiful, friendly and diverse country. While the current political tension has some worried, I am confident I will continue to build on what has already been a remarkable experience.