I owe my participation in the Fulbright English Teaching Assistant Program to Hastings College and its J-Term classes.

The genesis of my Fulbright grant began in a J-Term Cold War History class where I heard about an opportunity to travel to the Balkans the following year. In January 2014, I traveled to Albania, Kosovo, Montenegro and Croatia to explore the political environment in those countries after the fall of communism and conflicts of the 1990s. The experiential learning outside of the classroom provided enough background to feel comfortable choosing Kosovo as the destination required to select when applying for a Fulbright English Teaching Assistant award.

Understanding the political environment in Kosovo continues to be useful while I live and work in Kosovo, which remains Europe’s newest country, having only declared its independence from Serbia in 2008.

Country-building is not easy, and Kosovo’s path to garner international respect is ongoing with only 112 diplomatic recognitions as an independent state. It is in this political landscape where education of future generations becomes important. Having English language skills remains an avenue for students in Kosovo to further their education as well as raising their chances for a job prospects in a country where unemployment is rampant.

My day teaching begins at 7:00 a.m. at Gjimnazi Frang Bardhi in Mitrovica, Kosovo. I assist eight teachers who between them have 160 classes a week with more than 2,000 students who attend the school. I have opportunities to lead classes, discussions and share mutual understanding of culture through English language learning. While working at Gjimnazi Frang Bardhi, I have gained greater appreciation for the liberal arts background that Hastings College provided me. 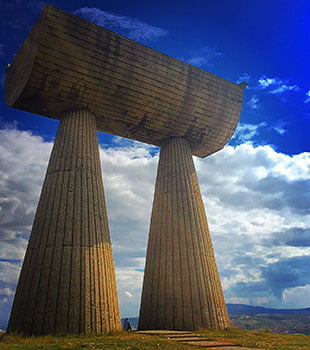 I know of no place else where one minute you will be talking about English grammar and, to achieve that “aha” moment, you have to provide an example found in pop music, fashion or technology to relate to the topic.

So why does this matter? The answer is found in a quote from the late Senator J. William Fulbright: “The Fulbright Program aims to bring a little more knowledge, a little more reason and a little more compassion into world affairs and thereby increase the chance that nations will learn at last to live in peace and friendship.”

The program was founded in 1946, and now I am a part of a group of men and women from all over the world who have been honored with 78 Pulitzer Prizes and won 53 Nobel Prizes, but most importantly we have been honored to serve as representatives of our countries to share and learn about our commonalities rather than differences in an ever polarizing world. Those ideals, to me, also sound similar to what students past and present are trying to uphold at Hastings College.