CPI was the perfect shot for Uhlig

He’s the guy who never misses a home football game, the guy on campus who always has a camera in his hands. 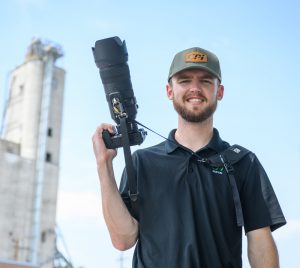 The former soccer player dove head first into his summer internship with Cooperative Producers, Inc. (CPI), a farmer-owned agricultural cooperative headquartered in Hastings, Nebraska. According to Uhlig, his position as a multimedia intern was the first of its kind for the company. He hopes to help push CPI further into the ever changing media-based marketing world.

Photography for Uhlig was something he couldn’t run from because his father worked as a wedding photographer throughout his childhood. No stranger to the media world, Uhlig worked for the school newspaper during his high school years, which jump started his career.

“My dad’s been taking photos since the day I was born. It felt like he was waiting for me to get into it,” he said. “I took my first dive into photography with my high school paper, taking photos, covering stories and completing news assignments.”

Uhlig is now a professional photographer who has gathered nearly three years of hands-on experience throughout his collegiate experience by working with the Hastings College student media team. In fact, Uhlig’s internship arose from his connection with the Center for Applied Media Arts (CAMA). CAMA offers a wide variety of opportunities for students — including live streaming athletic, music and special events; graphic and web design; social media; photography; and producing the campus newspaper.

“Kim Graviette from Career Services and Andy Chase from CAMA said this position would really match my talents and major. Thankfully, it worked out and I love it,” he said.

Uhlig said photography is the perfect way to tell the stories of the people he meets.

“I’m a storyteller by nature, and I love creating photo and video content,” he said. “My biggest driving factor is when I’m able to share the stories and conversations of the persons that I meet through photography.”

By Kiante Stuart, a junior from Nassau, The Bahamas, majoring in communications studies and business administration.