Contributing to the environment one job at a time 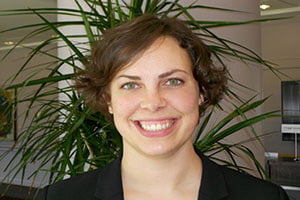 Recently, April Christensen ’12 spoke with an Executive from NRG Energy, one of the most prominent energy providers in the United States. “The three things he looked for in his hires were: raw intellectual horsepower, creativity and passion. He asked us, ‘What is it you are passionate about?’ This reminded me of the core principles I learned at Hastings College,” said Christensen, now getting her Master’s Degree from Duke University. “I continue to realize the large value of my liberal arts education, as it taught me how to think critically and analyze problems, no matter what sector I am working in.”

After being awarded the Creigh Weyer Scholarship from Hastings College, Christensen has been attending the Duke Nicholas School of the Environment, where she is working towards her Masters of Environmental Management with a concentration in Energy and the Environment. Students who apply for the Creigh Weyer Scholarship are expected to attend one of the top graduate schools in their field of study.

“The Creigh Weyer Scholarship provided me with not only the financial assistance for my graduate studies, but more importantly, a network of people to assist me in my career,” said Christensen. “The Creigh Weyer committee and family have been supportive and have provided guidance as I have refined my career goals and continued on my path towards my Master’s degree.” 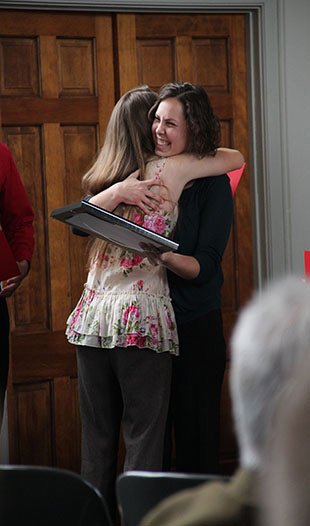 As part of her Master’s project, Christensen said she has recently joined a client-based group titled “Comprehensive Evaluation of European Renewable Power Programs.”

“Our client is Southern Company, a large energy company based in the southeastern United States,” said Christensen. “They will be funding a trip for my team to visit Europe next fall, primarily focusing on Denmark, the United Kingdom and Germany.” Not only that, Christensen said her application has been chosen for placement on a Bass Connections team at Duke. These teams are made up of students, both undergraduates and graduates, and faculty that collaborate ideas and put them into action. Starting in fall 2013, the teams are focused on five different ideas: Brain & Society; Information, Society & Culture; Global Health; Energy; and Education & Human Development.

“I will be on a team that will be studying ‘The Effects of Unconventional Shale Gas Development on Rural Communities,’” she said. “This work will primarily focus on the Marcellus Shale in Pennsylvania and effects that unconventional shale development has had there.”

Christensen said that because of various summer internships and student organizations at Hastings College, she was able to learn a great deal about what she enjoyed doing and the skills she could bring to a position. Some of her past internships include being a Safety and Environmental Department Assistant at Reinke Manufacturing, a Research Assistant at the Center for Research on Invasive Species and Small Populations at the University of Idaho, and an intern with the Southeast Alaska Conservation Council through the Alaska Conservation Foundation. After graduating from Hastings College, Christensen spent time working at a Hastings based energy efficiency start-up, Energy Pioneer Solutions.

While at Hastings College, Christensen said she learned a great deal through her student organization involvement, especially with the Student Environmental Action Coalition, a student group that worked on environmental issues across campus.

Christensen was also a recipient of the Bronco Award, the highest, non-academic award presented to students from the college. “The Bronco Award was especially meaningful to me, as I was and still am a large advocate for community involvement and contribution,” said Christensen. “I believe it is important to contribute to your community no matter whether that is where you live, work or attend school.”

With one year remaining to work towards her Master’s degree, Christensen said she still has time to explore options for her future career. “After graduation, I hope to pursue a career dealing with the integration of renewable generation into the electricity sector,” she said.

By Amanda Miller, a senior from Woodland Park, Colorado majoring in Journalism