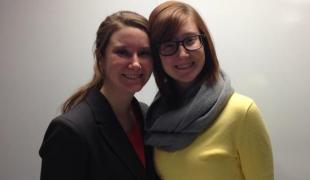 In May 2013, the Department of Languages and Linguistics named senior Liz Case, an English major from Gibbon, Neb., with a passion for in-depth research and a deep commitment to academic excellence, the 2013-14 Langvardt Scholar. Named for the late Dr. Arthur Langvardt, former Dean of the College and Professor of English, and his wife, Eunice, the scholarship is awarded to an outstanding junior English major. During the Langvardt Scholar’s senior year, he or she must present a scholarly paper to the campus community.

“Typically we look at the pool of anywhere between 10 and 15 English majors that are set to graduate.  Our first criterion is GPA, and then GPA in the major, and that typically ties between different candidates,” said Dr. Antje Anderson, Professor of English and Chair of the Languages and Literatures Department.  “We really go with the one who’s produced the most rigorous scholarship; who has the best record of getting stuff done on time [and] under budget. That’s typically a fairly straightforward process of looking at, often, three candidates with 4.0s where we have to make the decision partly on the basis of what kind of work have we already seen.”

Liz chose her topic carefully, working with both historical and literary analysis of Elizabeth Bowen’s The Last September. The novel is set in 1920s Ireland, during a period of upheaval and civil war between the nationalists of the south and the loyalists of the north.  Although the Langvardt lecture is primarily a showcase for literary analysis, Liz took it a step further in incorporating her month-long travels through Ireland as an Irish Fellow into her research and presentation on Feb. 10.

“The fact that she did a completely different, separate big house project that just becomes [extra material] here really gives her that sort of interdisciplinary expertise that we don’t ask for, and that goes above and beyond and above what the English major is expected to do,” Dr. Anderson said. “She could have [done] a literary analysis without the historical context. That was not her interest and that was not her focus, and I think she did a wonderful job of bringing in an additional area of expertise from history and politics to understand how the novel works and to read the novel in a very specific way.”

Liz chose Dr. Anderson as her faculty sponsor for the lecture and also worked with Dr. Rob Babcock, Professor of History and Chair of the History Department, on the Irish history components. Dr. Babcock initially suggested the big houses, mansion properties similar to those seen in Downton Abbey or the plantations of the Deep South, as an area of study after Liz had been accepted into the Irish Fellows program in early spring.

“It was nice, because it combines several different fields. It combines the literary aspect of it and the history along with current public policy,” Liz said. “I had to throw some of the history in to give people the background necessary to understand what [the author] does in the novel.”

Liz visited three big houses while in Ireland last fall as an Irish Fellow —  one a ruin, one a hotel and the other still owned by the original Anglo-Irish family — as a way to learn more about the houses and the role they played in Irish society.

“I loved having so much free rein, which is also what I loved about the Irish Fellows program, to go through the entire novel and pick out all the little bits and pieces of the passages that show what the Anglo-Irish are and that demonstrates their position well,” Liz said. “It was so difficult to find the most important things, and decide that even though I love this, I have to leave it out.”

Liz wrote several drafts of her lecture, working closely with Dr. Anderson to flesh out her thoughts and connect the various topics within her overall research. The process began during the summer, but the paper itself took about a month to write, edit and finalize.

“I think she’s done [the lecture] very, very well. We give people a pretty clear template—the talk has to be long enough; it has to be scholarly,” Dr. Anderson said. “You read your manuscript; you don’t get to talk through something or do a poster presentation.  You have to be rigorous with the text you are dealing with, and Liz is really, really good at this. All of our Langvardt [Scholars] have been picked because they’ve shown us they can analyze literature really well. What Liz brought to the table beyond that was that she already had so much background knowledge.”