Bui explores being an application developer as an intern

In a few weeks, Johnson Bui and 15 other interns will release Driveway, a competitive intelligence web application, to Farm Credit Services of America for internal use. 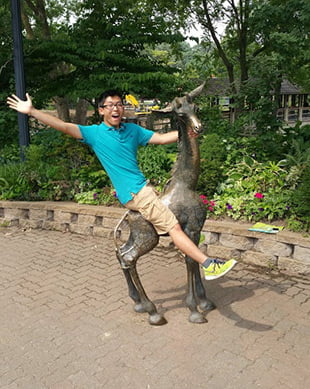 “The application is meant to streamline the process of identifying current and potential prospects while also providing all the necessary information to maintain or form a new relationship,” said Bui, a junior at Hastings College.

He said, “That will mark the first real-life application that I have launched: something that is sort of a rite of passage for programmers.”

A computer science major, Bui is interning as an application developer with Farm Credit Services of America, which is dedicated to serving the agricultural credit, risk management and financial needs of farmers and ranchers in Iowa, Nebraska, South Dakota and Wyoming.

At the start of the summer, the interns were divided into groups and sent to different locations.

“I resided in Omaha with the other developers and formed a team called Team Rocket,” said Bui. “Starting from just a database of information that Farm Credit Services collected, we are developing the backend server-side application program interface (API) and the front facing web application interface for a competitive intelligence web application.”

Each week brings a new leader, chosen on rotation within Team Rocket, to lead the team and decide what direction they are going on current tasks and new ideas.

By interning, Bui aims to become a better programmer. Not only does he have the chance to learn the programming languages and solve problems, but he is learning the bureaucratic procedures associated with any project, learning to take charge and how to adapt to one’s team.

“It has only been a month in and I have gotten a lot more than what I have expected. I have learned the process of planning, designing, developing and deploying a secure web-based application. Throughout my experience so far, I have learned how to better communicate my ideas and lead efficiently to achieve them with my teammates and other teams within the company.”

Due to the disciplined work habits he’s built as a student and member of the Hastings College Help Desk staff, Bui feels he has been able to grasp new concepts and dynamic problems as they arise. 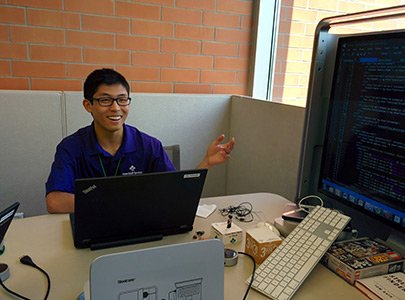 “Hastings provided me with the basic knowledge of programming and critical thinking necessary to adapt to real world conditions,” Bui said. “There are always gaps between the programming languages that are taught because of the sheer amount of them out there, but the basics, the conceptual thinking is similar throughout all of them.”

Although there have been challenges throughout the whole process of developing the new software, Bui claims that’s what makes coding fun.

Hastings College graduates and mentors Alex Eisele and Creighton Leif were the ones to tell Bui about this internship opportunity. The year before, they, too, were interns at Farm Credit Services and shared their experiences with Bui.

Working as an application developer has given Bui the chance to explore different career options. His interests lie in database systems and other fields in the computer science world. As he moves toward graduation, he continues to welcome opportunities to explore new areas. For example, designing and creating have always been something Bui has craved.

He said, “Coding satisfies that craving by allowing me to pursue the craziest ideas. Breaking down my enjoyment of it to its base form, I suppose I also enjoy it because I like to problem solve. Every idea can be broken down into smaller problems and equally so with every big problem. Anything can be done.”