Brian Puckett, a senior physics major from Lincoln, Nebraska, aspires to build a mechanics career in the aerospace industry and eventually find success among the stars. While realizing his dream to explore space is no easy feat, it developed a sense of tangibility after his back-to-back summer Research Experiences for Undergraduates (REU).

Puckett secured his first REU at North Carolina State University the summer after his sophomore year. Although he was still unsure of which area of physics he would pursue with his career, he hoped the experience would identify a clear path for him.

“As an undergraduate in physics, the career possibilities are pretty much endless,” he said. “I looked at the opportunity as a way to find a sense of direction in where I wanted to go after Hastings College.”

The REU accepted eight students, and each student was assigned a project specializing in a certain area of material science. Puckett was assigned a mechanical engineering project that explored new clean energy possibilities. 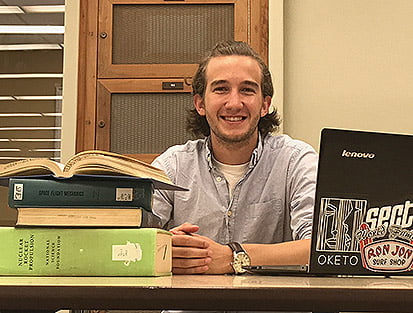 Throughout the summer, he worked in the NCSU laboratory designing and testing an energy harvesting system that could convert mechanical energy, like vibrations, into electrical power.

“The most challenging part was actually learning the concepts and ideas behind what I was making,” Puckett said. “I was doing research in graduate-level aerospace and mechanical engineering, so there was definitely a shock factor for me as an undergraduate from a small college.”

Puckett said building off his Hastings College experience made it easier to digest these complex topics. His classes at HC taught him not only the foundational concepts of physics, but how to learn on his own. His said his ability to learn independently helped him turn mind-bending ideas into tools for understanding the everyday physical world.

Once he established his understanding of energy conversion, Puckett applied the concepts he’d learned in the lab. He excelled in the hands-on atmosphere thanks to his background with lab work.

“At Hastings College, the science disciplines have a big emphasis on a hands-on approach and working in the lab. We do a lot of basic testing and data collection and analysis,” Puckett said. “I think that’s what prepared me for my first REU the most.”

Through his lab work, Puckett discovered his passion for engineering. More importantly, it guided him toward specializations in mechanical and aerospace engineering.

“Working in the lab in North Carolina allowed me to use my hands everyday to create something from nothing, then test and analyze it,” Puckett said. “I really liked doing hands-on work, and I realized early on I wanted to continue in the mechanical or aerospace direction.”

Newfound focus in hand, Puckett applied for another REU in 2017. This time, he hoped to dive deeper into mechanical and aerospace engineering.

“I was researching plasma physics, which is used in electric propulsion,” he said. “This is when an electromagnetic system propels spacecraft. It is cheaper and more efficient than traditional chemical propulsion systems.”

Electromagnetic propulsion systems operate by moving particles to create plasma waves. The momentum of the high-energy particles within the waves can move spacecraft, without the need for a fuel source.

During his research, Puckett ran simulations on a supercomputer to observe, calculate and record the movement patterns of particles within specific types of plasma waves.

“In the simulations I was looking for instabilities that might affect the performance and lifetime of electric propulsions thrusters. Understanding these instabilities can improve these systems,” he said

Although he was only a summer research assistant, Puckett’s research carried real-world implications. His supervising professor shared the developments of Puckett’s research with other scientists — including members of NASA and the US Air Force — to help expand the general understanding of plasma waves and deep space travel. 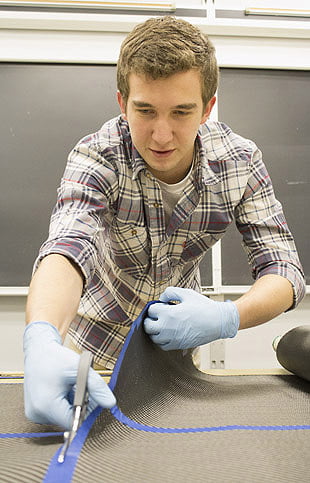 “It was terrifying at first, but once I settled into my role, it was rewarding to see the value of my coursework and collegiate efforts within the scientific community,” Puckett said.

Puckett enters his final year with a clear picture of his future goals. Using funds he received from the NASA Space Grant, Puckett will build a human exploration rover as part of his senior seminar project. The quadricycle would hypothetically allow humans to travel around all terrains on Mars.

Designing a high-caliber rover may seem challenging to most undergraduate students, but Puckett said he feels adequately prepared to take on the task.

“My summer REUs taught me how to work independently and make critical research decisions on my own, and my Hastings College education challenged me to expand my mind when thinking about complicated situations” he said. “I feel confident that this combination will help me succeed in completing my senior seminar research project.”

After finishing his rover, Puckett will apply for graduate school and officially launch his career in mechanical engineering. If all goes as planned, his professional trajectory will send him straight toward the cosmic success he’s always dreamed of.