Brett L. Erickson, associate professor of Visual Arts at Hastings College, will address the nature of photography and show his photographs of the American West for the fall 2017 Artist Lecture Series Invited Faculty Lecture. 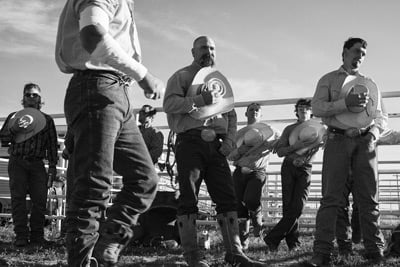 His address, “Cowboys, Legends, and Storage Units: Photographing the New American West,” explores the evolving nature of photography, his own photographic processes, and the resulting images of the western United States. The lecture is scheduled for Friday, October 20 at 10 a.m. in French Memorial Chapel (800 N. Turner Ave.) and is free and open to the public.

Erickson’s presentation will be one of two Invited Faculty Lectures to take place in the 2017-18 academic year. Each spring, Hastings College students select two faculty members to present campus-wide lectures on the professors’ topics of choice during the next academic year. To be selected is considered the highest honor awarded to faculty.

Dr. Antje Anderson, professor of Languages and Literature, was also selected by students, and will deliver a lecture in spring 2018.

A sought-after workshop instructor, he teaches yearly courses at the world’s foremost photographic educational center, the Santa Fe Photographic Workshops. He serves as associate professor of Visual Arts at Hastings College, where he has taught design, photography and online design and development since 2003.

Erickson is sponsored by Hahnemühle, one of the world’s oldest and most prestigious art paper companies, and he is a member of both the Royal Photographic Society and the Society for Photographic Education.