SummerStage to produce frightening fun with ‘The Vampire’ 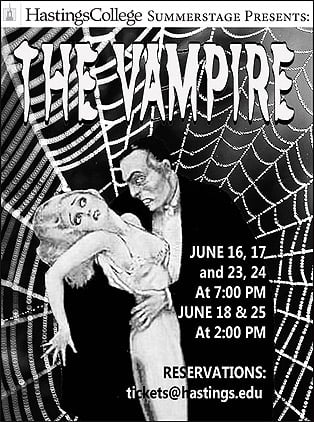 The Hastings College Department of Theatre’s SummerStage stock company is set to produce its fifth annual production with Dion Boucicault’s comedy melodrama, “The Vampire.” This classic from the 18th century tells the frightening tale of a vampire who wouldn’t die.

Performances are scheduled for June 16–17 and June 23–24 at 7 p.m., and June 18 and June 25 at 2 p.m. in Scott Studio Theatre. General admission tickets are $8; tickets for seniors and students are $5. Advanced reservations for “The Vampire” can be made by emailing tickets@hastings.edu.

The interactive production is “silly fun” for the whole family, allowing audiences to cheer the hero, boo the villain and throw popcorn! Kool-Aid and Eileen’s Cookies will be available for purchase during the show.