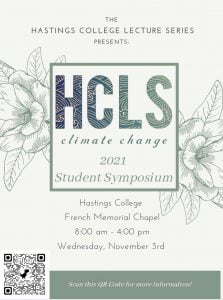 The symposium will include both in-person and virtual presenters — all in French Memorial Chapel (800 N. Turner), with the first speaker being at 8:30 a.m. All Hastings College Lecture Series Student Symposium speaker events are free and open to the public. Face masks are currently required inside campus buildings. Details can be found at hastings.edu/hcls.

From 10:00 a.m. to 2:00 p.m., a sustainability fair will be held in the Hazelrigg Student Union (914  N. Elm Avenue). Local businesses and others will be promoting their environmentally conscious and community friendly products and more.

Emily Cloyd is an ecologist, climate scientist and advocate for community-engaged science. As director of the American Association for the Advancement of Science’s Center for Public Engagement, she leads a variety of science communication and public engagement programs that train scientists and engineers, build scientific institutions’ capacity to support public engagement, and directly engage the public. Prior to joining AAAS, Cloyd led engagement and outreach for the U.S. Global Change Research Program and the Third National Climate Assessment, served as a Knauss Marine Policy Fellow at the National Oceanic and Atmospheric Administration and studied the use of ecological models in Great Lakes management. She holds an executive certificate in Nonprofit Leadership and Management (University of Notre Dame), a master’s in Conservation Biology (SUNY College of Environmental Science and Forestry) and a bachelor’s in Plant Biology (University of Michigan).

Jess Benjamin’s imagination was trained in the irrigation ditches on the 100th Meridian and is one of the last to be educated in a two room schoolhouse. Her father, Howdy, began teaching her about land management, geographical history, and farm markets as soon as she could handle a shovel: age 5. Benjamin now lives in the city and has gained a balanced perspective on our nation’s water and drought issues. Benjamin received her B.A. from Hastings College in 2001 and worked as a studio assistant for ceramic artist Jun Kaneko until 2006. She returned to Omaha the same year to pursue her research and continue to make large-scale ceramic sculpture. Benjamin is currently the Lied Art Gallery Director at Creighton University in Omaha. Benjamin has exhibited her artwork at the Amarillo Museum of Art, Joslyn Art Museum, Museum of Nebraska Art, the Great Plains Art Museum, and other regional galleries. In 2013, the Nebraska Arts Council awarded her an Individual Artist Fellowship Grant.

Jamie Sarai Margolin is a 19-year-old Jewish Colombian-American organizer, activist, author, public speaker and filmmaker. She is co-founder of the international youth climate justice movement called Zero Hour that led the official “Youth Climate Marches” in Washington, DC and 25+ cities around the world during the summer of 2018. Zero Hour has more than 200 chapters worldwide and has been a leading organization in the climate movement. Margolin is the author of a book called “Youth To Power: Your Voice and How To Use It,” (youthtopowerbook.com), which has been translated in many languages and sold all over the world. The book serves as a guide to organizing and activism, and is a recipient of the 2020 Gold Medal Nautilus Book Award for YA nonfiction. In addition to her authorship, Margolin is a plaintiff in the Our Children’s Trust Youth v. Gov Washington state lawsuit, Aji P. vs. State of Washington, and served as a surrogate for the Bernie Sanders 2020 Presidential Campaign.

Judi Brown, co-founder and chief impact officer of CivicMakers, brings to her practice nearly 12 years of experience in applied innovation methodologies with social enterprises, nonprofits and government agencies. Her work is grounded in multi-disciplinary, multi-sectoral approaches with a lens toward equity and inclusion. Prior to CivicMakers, Brown worked as a Design Strategist with Collective Invention, and honed her applied design thinking and public involvement skills while working on survey development and evaluation services for Zawadisha, a micro-lending fund benefiting female entrepreneurs in Kenya. Brown’s areas of expertise include Applied Human-Centered Design, Service Design, Curriculum Design, Consensus Building, Project Management, Stakeholder Engagement, Impact Evaluation and Facilitation.

Laurel Kay Teal is a 2017 graduate of Hastings College, where she was an Irish Fellow (2014), Ms. Bronco (2016) and voted a Who’s Who (2017). She studied under Dr. Bob Amyot and Dr. Rob Babcock. Teal then went on to receive an M.A. in American history from Boston College (2019), where she studied under Dr. Heather Cox Richardson. Teal also holds an MPA in natural resource management from the University of Colorado at Denver (2020). Her capstone, conducted on behalf of Denver Water, analyzes sediment mitigation policy on the upper South Platte River in lieu of catastrophic wildfire. The sediment traps she ultimately recommended to Denver Water sit on the river to this day. Teal currently works for Colorado Parks and Wildlife in Castlewood Canyon State Park. She is working towards a commission as a permanent park ranger. In addition to teaching visitors about the history of the area, she helps manage the park land and groundwater aquifer, responds to emergencies and runs the ranger station and visitor center.

Katy Ayers is a non-traditional, first-generation bioengineering student at Washington State University and an alum of Central Community College. Ayers gained media attention after growing a 2.3 m canoe, which she named the Myconoe and later earned the title of World’s Largest Fungal Mycelium Canoe. After the success of the Myconoe, Ayers began to work on her next idea, MycHotels, bee hotels grown from a native Nebraska Fungus. The MycHotel Project put more than 25 MycHotels for research purposes in the summer of 2021 with funding through a Nebraska Public Information and Education grant. The hotels will be collected and compared to traditional bee hotels placed in the same areas this winter. Ayers hopes to create habitat for solitary pollinating insects as well as reduce waste streams through reuse with this project.