The Hastings College student media team will manage all game livestreams from the 2020 NAIA Division II Women’s Basketball National Championship. The students will be in Sioux City, Iowa, March 11-17, and will produce all 31 games, including the semifinal and championship games on March 16 and 17, that will stream on ESPN3. 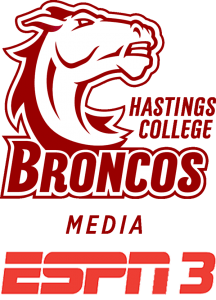 Hastings College media students, coordinated through the College’s Center for Applied Media Arts (CAMA), have covered the tournament for the last 17 years. Students operate all cameras, production work, replays, highlights and in-game graphics. The crew is managed by Autum Conley, director of CAMA.

Livestreams of Hastings College women’s basketball team will be available at no cost through the College’s Stretch media portal, the same portal used through the regular season. The Lady Broncos, who earned a #1 seed in the tournament, play Thursday, March 12, with a 7:00 p.m. tip-off.

Members of the 2020 Hastings College media team making the trip to Sioux City are listed below.

Hastings College is Nebraska’s premier private college. A four-year residential college that focuses on student academic and extracurricular achievement, Hastings’ student-centered initiatives include providing books, an iPad and a two-week study abroad experience at no additional cost. A block-style semester schedule allows professors and students to focus on fewer classes at a time and promotes hands-on experiences. Discover more at hastings.edu.