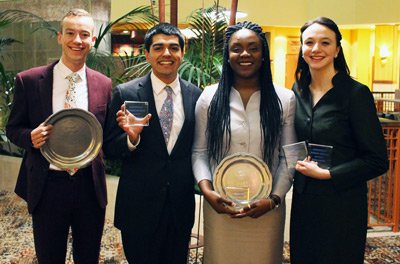 The strong performance pushed the team to 12th place out of more than 70 colleges and universities across the country that compete at the tournament, the team’s highest finish since 2008.

Caleb Merritt, a junior from Brookings, South Dakota, finished first in dramatic interpretation and is the program’s fifth national champion since 1990. He won with perfect scores from all five judges.

Senior Eunice Adounkpe of Omaha, Nebraska, finished in second place in prose interpretation, and was also named a Forensics All-American, the 12th All-American in the program’s history.

Other students making it into the quarterfinals included Andrew Boge, a junior from Johnston, Iowa, in communication analysis; and Carly Spotts-Falzone, a sophomore from Plymouth, Minnesota, in program of oral interpretation and in duo interpretation with Adounkpe.

Students who qualified for nationals include:

The national competition marks the end of a strong season for the forensics team this year, which included setting a school record with five individual state championships at the Nebraska Intercollegiate Forensics Association State Tournament in February.