A series of music-related events, recitals and programs, including the Art Song Festival and Piano Festival, is set for March 21-26 as part of Music Masters Week organized by the Department of Music and Theatre at Hastings College.

The week is designed to inspire both students and the community as a whole with outstanding performances and opportunities to interact with musicians, alumni and educators.

All events are free and open to the public, and take place in the Fuhr Hall of Music (927 N. Ash Avenue).

Schedule at a Glance 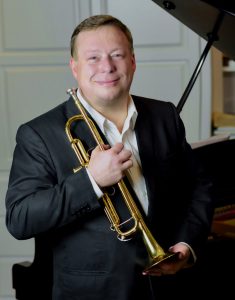 Music Masters week kicks off Monday, March 21 at 7:30 p.m., with a recital by Dr. Brian Shaw on trumpet. Shaw will perform a wide selection of repertoire spanning over three centuries on several different instruments, including music by Biber, Molter, Verdi, Debussy, Hindemith and John Williams. He is known internationally for his versatility and is principal trumpet of Santa Fe Pro Musica, Spire Chamber Ensemble, the Baton Rouge Symphony and co-principal trumpet of the Dallas Winds. He will be joined by Hastings College faculty pianist Dr. Jonathan Sokasits and trumpeter Dr. Louie Eckhardt.

The Hastings College Art Song Festival exists to introduce students and the community to the rich, diverse and unique repertoire of Western classical art song. As an annual event, the festival will highlight the repertoire of a single composer, language, nationality or style to help viewers develop a deeper appreciation of the diversity of the art song.

A Music Education Forum at 6:15 p.m. Wednesday, March 23, features Hastings College alumni Michael Stinman, Dr. John Roebke, Mark Harman and Linda Johnson. Each will talk briefly and answer questions and have an open discussion about music education. The panel will be moderated by Dr. Robin Koozer.

Stinman serves as the general music specialist (K-5) and the middle school jazz band director at Treynor Community Schools in Treynor, Iowa. Roebke is director of bands at Theodore Roosevelt High School and Music Department chair for the Kent City Schools (Ohio). Johnson is a retired music educator after 26 years of teaching. Harman has been director of vocal music at Fremont High School for 21 years. Koozer is emeritus professor of music and a development associate with the Hastings College Foundation.

Music Masters Week wraps up on Saturday, March 26, beginning at 9:00 a.m. with the 35th Gladys Frisch Harris Piano Festival. The festival features guest performer and clinician Dr. Grace Huang of the University of Georgia, and a concluding performance by Dr. Jonathan Sokasits on piano, assistant professor Dr. Nathan Mertens on saxophone and Taylor Wilson, a high school piano student of Sokasits. Additional information, including how students in grades 8-12 can sign up for a masterclass with Huang or Sokasits, can be found at hastings.edu/pianofestival.

Dr. Brian Shaw is co-principal trumpet of the Dallas Winds and is principal trumpet of Santa Fe Pro Musica in New Mexico and Spire Baroque Orchestra in Kansas City, Missouri. He is noted for his versatility, performing and recording regularly as a classical and jazz trumpeter on modern and period instruments. He is also very active as a jazz arranger and as an author, and is currently co-writing a biography of jazz legend Kenny Wheeler. As a teacher, Shaw continues as guest instructor of Baroque trumpet at the Eastman School of Music after leaving his former position as professor of trumpet and jazz studies at Louisiana State University, which he held for nearly 15 years. He lives in Seattle with his wife, Lana, his son, Thomas, and his step-son, Elliot.

Michael Stinman serves as the general music specialist (K-5) and the middle school jazz band director at Treynor Community Schools in Treynor, Iowa. This is his sixth year at Treynor and 10th year teaching overall. Always seeking out new educational opportunities, Stinman said he loves finding creative ways to make a connection with his students through music. He earned his bachelor’s degree in music education and Vocal Performance in 2012, and is currently working toward a master’s degree in music education.

Linda Johnson is a retired music educator after 26 years of teaching. She taught K-5th grade general music at St. Michael’s Elementary School in Hastings for four years and taught for 22 years at Adams Central Jr./Sr. High School. Her duties included teaching junior high general music and choir, 8th grade musical theater class, 9/10 choir and select choir, 11/12 varsity choir and madrigal, and producing the annual musical. She was also co-founder of the South Central Nebraska Children’s Chorale, which has provided musical learning opportunities for area children for 26 years. She also serves as director of the Calvin/Westminster Choir (6th-12th grades) at First Presbyterian Church in Hastings. She earned her music education degree in 1979 and a master of arts in teaching degree in 1994. She has been recognized by the Hastings Symphony Orchestra as the Arts Educator of the Year, by Walmart as the area Teacher of the Year and Adams Central Public Schools as Teacher of the Year.

Mark Harman, a 1999 graduate, has been director of vocal music at Fremont High School for 21 years. He earned a master of music degree from the University of Nebraska–Lincoln in 2007 and is currently pursuing a doctorate in educational leadership. Under Harman’s direction, the Fremont High School choir has received numerous invitations to perform with the Omaha Symphony on their Choral Collaborative and Celebrate Creativity concerts. The choir has twice been a featured performing ensemble at the Nebraska Music Education Association Convention. In the spring of 2020, the FHS choir was slated to perform at Carnegie Hall. Between 2009 and 2019 he toured bi-annually with the Nebraska Ambassadors of Music as the director of choirs, which leads Nebraska high school musicians on a two-week musical tour of Europe. In 2005 he was named Outstanding Young Choral Director, and in 2013 was named Outstanding Choral Director by NCDA. In May 2021 he was recognized as the Nebraska Teacher of the Year by the Nebraska High School Theatre Awards program.

Dr. John Roebke is director of bands at Theodore Roosevelt High School and Music Department chair for the Kent City Schools (Ohio). He also teaches Arts & Ideas and Music Theory, and is the faculty advisor to the TRHS chapter of the National Honor Society. He graduated from Hastings College in 1989 with a bachelor of music degree, earned a master of music education degree from the University of Colorado, and a doctor of philosophy degree from Kent State University. Prior to moving to Ohio, Roebke taught instrumental music in the Hastings Public Schools (Nebraska). He was a 1996 recipient of the Jack R. Snider Young Band Director Award presented by the Nebraska State Bandmasters Association. Roebke is a member of the Ohio Music Education Association, the National Association for Music Education, the American School Band Directors’ Association, the College Band Directors National Association and Phi Mu Alpha Sinfonia. In addition to musical activities, he enjoys reading, fine dining, travel, and photography.

Dr. Robin Koozer is emeritus professor of music and department chair at Hastings College. Koozer earned his bachelor’s degree at Hastings College in 1976, master’s degree at Kearney State College, doctorate at Arizona State University and an Honorary Doctorate of Fine Arts (honoris causa) from his alma mater. Koozer was named Hastings College’s Outstanding Advisor in 1996 and was chosen by students and faculty twice to deliver the prestigious Invited Faculty Lecture. He serves the National Association of Schools of Music as a consultant and evaluator for accreditation. In addition to his work with Hastings College, in 2010, Koozer joined the Hastings College Foundation as a development associate with primary work in fine arts and music development initiatives.  In 2021, Koozer was the second music inductee of the Hastings College Fine Arts Hall of Fame. For several summers, Koozer served on the faculty of the Bethel Woods Music Academy in Bethel, New York.

Philip Daniel Zach did his graduate work at the University of Missouri–Kansas City Conservatory in Piano Performance and his undergraduate studies at Hastings College, where he earned a bachelor’s in piano performance and piano pedagogy. During his undergraduate years, Zach discovered a passion for creating his own music. He was heavily inspired by contemporary classical composers such as Olafur Arnalds, NIls Frahm, Philip Glass, Max Richter and more by their ability to transmit powerful emotions thru simplistic, minimalistic sound while each possessing their own unique “voice” in a non-cliche manner. He aims to follow in these musicians footsteps by blending aspects of classical music, minimalism, cinematic qualities and more. Zach has released six studio albums and several EP’s. He continues to compose/record solo artistic projects yet is venturing into the film scoring and music licensing world. His music has been streamed more than 15 million times and has been used countless times in film. This last year has also seen him begin to custom compose soundtracks for films as well as find a niche in composing for dance collaborations. Zach  resides in Lincoln, Nebraska, with his wife and dog working in his home studio.

Dr. Grace Huang is assistant professor of piano pedagogy and class piano coordinator at the University of Georgia where she teaches undergraduate and graduate pedagogy courses, class piano and oversees all aspects of the class piano program. Additionally, she owns and operates an independent piano studio in Athens. Prior to her UGA appointment, Huang was on the piano faculty of the Cleveland Institute of Music, where she maintained a studio in the CIM Preparatory division and served as Head of Secondary Piano in the Conservatory division, overseeing the class piano program. She was also on the piano faculties of Millikin University (IL) and St. Cloud State University (MN), as well as summer music programs such as UGA Summer Music Camp and Institute, Summer Sonata (CIM), Illinois Summer Youth Music (University of Illinois at Urbana-Champaign) and Blue Lake Fine Arts Camp. Huang holds degrees in piano performance from the University of Minnesota (MM and DMA) and Vanderbilt University (BM). Former teachers include Lydia Artymiw, Craig Nies, Roland Schneller and Sue Hudson; pedagogy studies were with Rebecca Shockley, Karen Ann Krieger and Elizabeth Cormier. She is a Nationally Certified Teacher of Music.