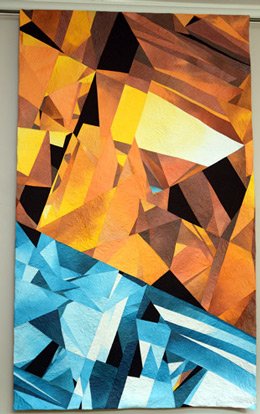 Artist MJ Kinman works with fabric and paint to create giant portraits of colored gemstones. “Inspired by the image of an actual stone, I study the gem to understand its personality,” she said. “I work in a large format to convey the story of light and color encased within its facets.”

“I like to say I make the biggest diamonds in the world. Yet instead of working with the hardest substances on Earth, I work with the softest – cloth,” Kinman said.

Kinman’s work has been exhibited in galleries, museums and national juried competitions. Her work was featured in the August/September 2017 issue of Quilting Arts Magazine, the premiere publication for the art quilt movement, and she filmed three segments of Quilting Arts TV in September 2017 which will be aired on PBS stations across the country in 2018.

She’s also entered into agreements with a major industry distribution company and a book publisher, and is developing a series inspired by America’s National Gem Collection at the Smithsonian’s National Museum of Natural History. 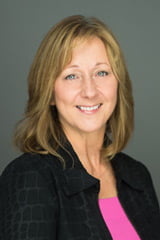 Kinman has a Bachelors of Social Work from Bowling Green State University (Ohio) and a Masters of Social Work from the University of Michigan. She worked a family social worker and then as an administrator and fundraiser for numerous organizations in Ohio and Kentucky. In 2000 she moved from the non-profit world to the private sector, working as a business analyst and technical project manager. She stepped away from the corporate world in 2014 to focus on art.