Musicians who were in the original Blues Brothers Band; the Saturday Night Live Band; and Blood, Sweat and Tears, and other top musicians from Nebraska, Chicago and Paris are headlining the Hastings College Jazz Festival Concert set for Monday, April 1 at 7:30 p.m. in Lynn Farrell Arena (800 E. 12th Street in Hastings).

Thanks to the support of two-dozen sponsors, the concert is free and open to the public, with free will donations going to the Gary Sinise Foundation. Arena doors open at 6:30.

The concert also features numerous local elementary, middle and high school groups, as well as the Hastings College Jazz Ensemble and a few other surprise musicians. The school and college groups will perform with the musicians, giving the school and college students a once-in-a-lifetime experience — and providing an exciting evening of music for those attending the concert.

The guest musicians, who are also serving as clinicians for middle and high school bands as part of the Festival, as well as Artists in Residence for Hastings Public Schools April 1 and 2, include: 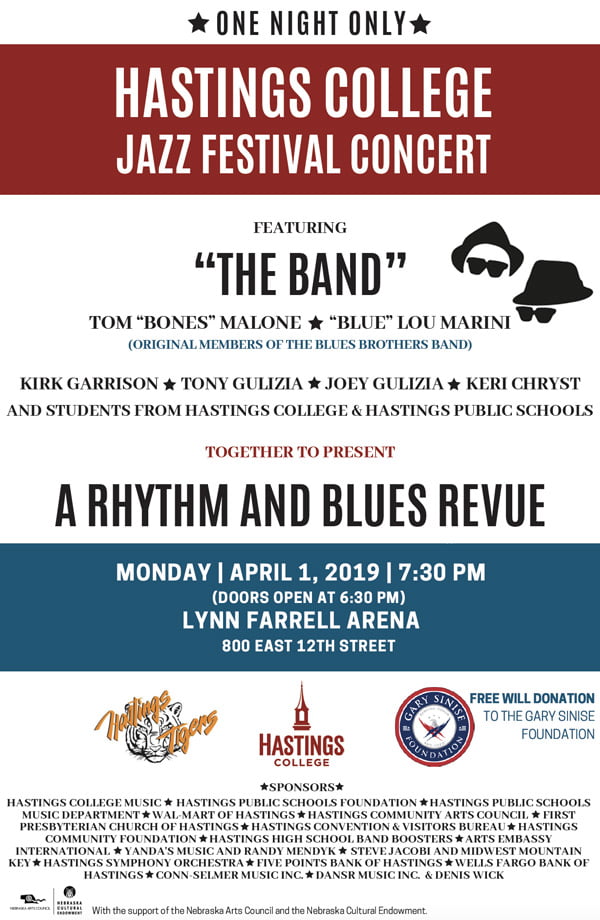 Local school groups participating in the concert include:

Separate from the concert, the guest musicians are serving as clinicians April 1 for middle and high school bands who attend the Hastings College Jazz Festival during the day. Then, on the morning of Tuesday, April 2, students from the Festival can spend time in small groups meeting and working with the clinicians on campus.

The afternoon of April 2 and morning of April 3, the guests will serve as Artists in Residence for Hastings Public Schools. As part of this program they’ll meet and work with fourth grade through high school students.

Details can found at hastings.edu/jazzfestival.

Thomas “Bones” Malone (trombone) is an American jazz musician, arranger and producer. As his nickname implies, he specializes on the trombone, but also plays trumpet, tuba, various saxophones, clarinets, flutes, piccolo and other instruments. He is famous for being a member of The Blues Brothers Band, Saturday Night Live Band (served as leader of the band from 1981 to 1985), and a member of the CBS Orchestra, the house band for the Late Show with David Letterman. Malone currently plays with the Lt. Dan Band.

“Blue” Lou Marini (saxophone) is one of the most sought after session horn players on saxophone, flute and clarinet. Solo artist, arranger and composer Lou Marini has electrified audiences with his “sultry, seductive and singular” sounds in jazz, rock, blues, classical music and in film and television shows and specials. He’s been a member of Blood, Sweat and Tears, The Saturday Night Live Band, The Blues Brothers Band and his credits include hundreds of albums, many of which have gone platinum.

Kirk Garrison (trumpet) is an active performer, educator and composer in the Chicago area. A veteran of the Chicago jazz scene, Kirk attended Mankato State University before honing his skills in the United States Air Force Band. After leaving the Air Force in 1992, he completed his masters degree in Jazz Studies at DePaul University where he is now a member of the jazz faculty. He is also on faculty at Concordia University, Chicago. Garrison currently plays with the Lt. Dan Band.

Joey Gulizia (percussion) has been performing since childhood. By the age of 10, he was drumming regularly with his father Joe Gulizia Sr. and brother Tony. Joey’s been involved in music education for over 30 years. He has conducted hundreds of residencies, workshops and clinics for students of all ages. He has been inducted to the Nebraska Music Hall of Fame and has received the Excellence in Education award by the Governor of Nebraska. Joey has traveled extensively including all 50 of the United States. Just this past year, Joey was drumming in Austria and Switzerland, performed on the annual Gulizia Brothers Jazz Cruise to Alaska and the Caribbean, and he once again toured with the Mannheim Steamroller.

Tony Gulizia (keyboard and vocals) began his music career at the age of 8, working with his father, and, later, with Joey, his brother. Tony studied music at the University of Nebraska-Omaha. It was there the Gulizia Brothers were formed. In 1979, the talented musical duo began working, in conjunction with the Nebraska Arts Council, in the Artists in Schools program. By 1990, their involvement in music programs for youth had escalated to leadership in the Mid-America Arts Alliance, involving themselves increasingly in Artist in Schools programs spanning a seven-state region.

Keri Chryst (vocalist) is international performer and educator, currently living and working in Paris, France – by way of Chicago, where she studied jazz at Northwestern University. Her spunky, authentic “in the pocket” swing, soulful groove, together with an instrumental approach to singing and improvisation, have charmed audiences across the Western Hemisphere and fast earned her a reputation as a musician’s singer.

Hastings College is a private, four-year institution located in Hastings, Nebraska, that focuses on student academic and extracurricular achievement. Hastings College has been named among “Great Schools, Great Prices” by U.S. News & World Report and a “Best in the Midwest” by The Princeton Review. For more, go to hastings.edu.