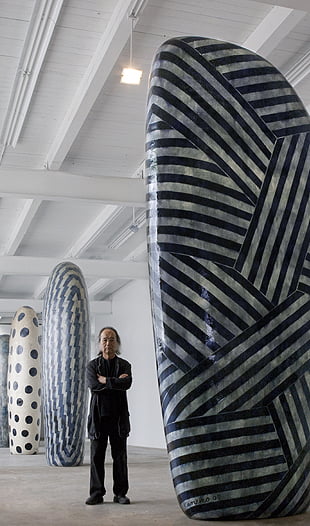 Kaneko is an Omaha-based artist who is best known for his painted ceramic sculptures. He started his career as an artist in Japan, but transitioned to America in 1963 when he came to the United States to study at the Chouinard Institute of Art. His work has been displayed and installed worldwide. One of his more recent works, a 56-foot glass tower, was installed in 2014 in the center of his Plaza in Lincoln, Nebraska. A Kaneko piece was also installed prominently outside of the Jackson Dinsdale Art Center, on the corner of E. 12th Street and N. Elm Avenue.

Though his works are the largest freestanding ceramic art pieces in the world, few people closely know Kaneko. Geyer, an Emmy Award-winning filmmaker, has been following Kaneko off-and-on for 25 years. He has produced and/or directed several national and regional public television documentaries that have received numerous honors, including 17 national awards. Driven by his curiosity about Kaneko’s origins and influences, Geyer set out to combine his past work with more recent video scene to create “Kaneko’s Monumental Risk” as a way to bring light to his life.

The documentary follows Kaneko around the world as he works in various locations, including Omaha, San Francisco, New York, Japan and Puerto Vallarta.  An epilogue details the creativity center in Omaha that Kaneko and his wife built in 1998.

Geyer’s friendship with Hastings College Board of Trustees member Kim Dinsdale led to a collaboration between Hastings College and the Geyer Group LLC—a company specializing in educational public television and internet media, of which Geyer is the executive producer—to organize an early showing of the documentary.

The documentary will be made available more broadly when it premiers on NET Television, Nebraska’s public television station, in early 2017.