Hastings College Theatre is hosting a live virtual production of two capstones in April. “The Importance of Being Earnest” by Oscar Wilde will be shown online April 16 and 17, and “You Do Love Me,… Don’t You?” by Claire Demmer will be shown online April 23 and 24. Both capstones, directed and designed by senior theatre majors, will be held virtually on Zoom beginning at 7:00 p.m., with a link provided via email to those who request tickets. 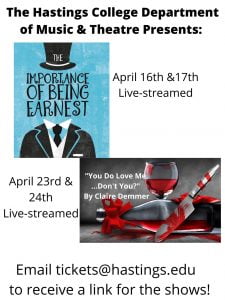 “The Importance of Being Earnest” takes a satire approach to old Victorian ways with themes of marriage and other trivial matters. Directing this Oscar Wilde classic is Luke Liffengren of Conifer, Colorado. “The Importance of Being Earnest” is a late nineteenth century farce centering around Jack Worthing, a young man who has created an alter ego he employs to avoid social obligations. All is well until he must rid himself of this counterpart for the woman he loves

“You Do Love Me,… Don’t You?” is a comedy turned scary thriller about what happens when you don’t truly know the man you are bringing home. In “You Do Love Me,… Don’t You?” by Claire Demmer, directed by Liz Lee of Colorado Springs, Colorado, Peta-Ann doesn’t truly know Leon, the man she is bringing home to meet her family for the first time. Leon is the “perfect” gentleman until Peta’s skeptical family starts making comments about him not being right for their daughter and that he has hidden intentions. These comments force Leon’s true self to come to light, showing that bringing a stranger home might not be such a good idea.

Directed and designed by Hastings College students in their senior year, these plays allow students to demonstrate their knowledge from classwork and previous productions and are a requirement for graduation.

To reserve tickets for either show, email the box office at tickets@hastings.edu with the date and time of the production you’d like to attend. An email with the Zoom link and passcode will then be sent.

The Importance of Being Earnest by Oscar Wilde

You Do Love Me,… Don’t You? By Claire Demmer

Crew of Both Shows