Hastings College Media was awarded the NAIA Cheryl K. Brown Meritorious Service Award during an awards ceremony at the 2017 DII Women’s Basketball National Championship. The annual award is presented to a citizen or organization of the Sioux City community for their contribution and dedication to the NAIA Division II Women’s Basketball Championship.

HC Media received the award as recognition for its live stream and additional coverage of the national championship. For 14 years, Hastings College students have gone to the tournament, initially covering the Hastings College Lady Broncos. For the last 10 years, however, students have produced live broadcasts of each game throughout the championship. The NAIA also contracts these productions to be shown on the NAIA Network, and the semi-finals and finals on ESPN3.

“I am so excited to have HC Media be the recipient of the NAIA Service Award. The level of commitment and hours they invest in the NAIA Tournament is unbelievable,” said Corey Westra, co-director of the National Tournament, Great Plains Athletic Conference Commissioner and himself a 2008 recipient of the Cheryl K. Brown Meritorious Service Award. “They have become a key part of our event, and the quality of product they provide is top notch. Above all, they are great kids and representatives of Hastings College.”

The award honored generations of HC Media members that have attended the National Championship as a part of the broadcast crew, including the 20 students from the 2017 crew.

“Our students work hard during the week-long tournament to gain invaluable experience. This honor speaks volumes of the professionalism our students exhibit while engaging with players, coaches, officials and fans during the national tournament for the past 14 years,”  said Chad Power, HC Media faculty sponsor and assistant professor of media arts. “I’m proud of our HC Media students, and I enjoy each Sioux City adventure with them.” 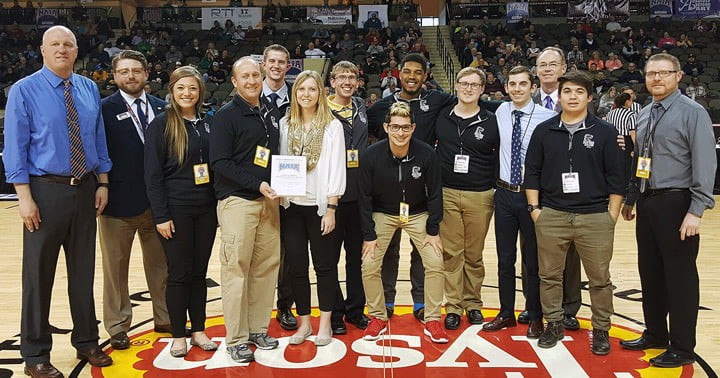