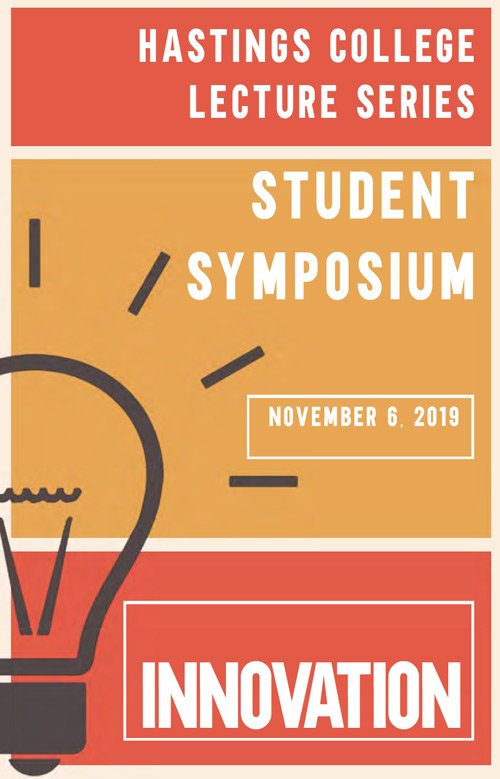 Students serving on the committee invited speakers that would focus on innovation through a broad range of topics, from innovation within the job force, competitive eating, art and more. Speakers will discuss the unique experiences they have both overcome and witnessed.

All Hastings College Lecture Series Student Symposium speaker events are free and open to the public.

All speakers and panelists are on November 6 at various locations on campus and include:

Additional information about the speakers is included below.

Dr. Brian Kloppenborg is a research scientist at the Georgia Tech Research Institute and Founder of Pratum Labs, LLC, a data science and machine learning company. He received his Ph.D. in physics from the University of Denver and had postdoctoral research fellowships at the Max Planck Institute for Radio Astronomy and Georgia State University. While in academia he is an author on more than 50 publications, including two in the prestigious scientific journal, Nature.

Phil Tiemeyer is an associate professor of history at Kansas State University. His book, Plane Queer: Labor, Sexuality and AIDS in the History of Male Flight Attendants, examines the contributions of flight attendants to legal struggles for gender equality and LGBTQ rights. The book has won critical acclaim in the scholarly world and also led to publicity on NPR’s Morning Edition, the Philadelphia Inquirer, Salon.com and other media. Tiemeyer is currently working on a second book, Aerial Ambassadors, which examines flight attendants working for airlines from the so-called Second World and Third World during the Cold War.

Alecia Grullón moves between performance, video and photography. She channels her interdisciplinary approach towards critiques of the politics of presence—an argument for the inclusion of disenfranchised communities in political and social spheres. Grullón’s works have been shown in numerous group exhibitions, including Franklin Furnace Archives, The Bronx Museum of the Arts, BRIC Arts | Media House, School of Visual Arts, El Museo del Barrio, Columbia University’s Wallach Art Gallery and Performa 11. She has received grants from several institutions including the Puffin Foundation, Bronx Council on the Arts, and the Department of Cultural Affairs of the City of New York. Review’s and essays regarding Alicia’s work can be found in the New York Times, Village Voice, Hyperallergic, Creative Time Reports, Art Fag City, and ArtNet News. Grullón has participated in residencies in the United States, South Korea and Germany, and has presented workshops as part of the 2017 Whitney Biennial with Occupy Museums, Creative Time Summit ’15 and The Royal College of Art, among others. Grullón is recent recipient of the inaugural Colene Brown Art Prize.

Mary Bowers is one of Major League Eating’s most recognizable personalities. If variety is the spice of life, hers is a life filled with flavor. For more than a decade, she worked with the U.S. Department of Homeland Security in high-security project management, providing her clients with tools to detect and prevent threats, ensure public health and safety, and facilitate international trade and travel. And now, she’s ready for the main course! Bowers’ mission is to combine her expertise in high-security project management and competitive eating to encourage government officials, community leaders and members of the public to provide families with the education, nutrition, body awareness and mental health support resources that inspire a healthier, happier world.

Chris Junker has been at the Nebraska Department of Education since 2010. She has more than 25 years of experience in the field of HIV/AIDS/Sexual Health Education. Working with adolescents and educators to understand the value of comprehensive sexuality education and helping adolescents to develop skills to make healthier choices when it comes to HIV/STD, pregnancy, substance abuse, suicide, bullying, healthy relationships and matters related to LGBTQ. Junker is the founder and advisor of the award winning HIV/AIDS Peer Educators, the Sunny “D’s” at Hastings Senior High School, as well as the co-advisor of the Peer HIV Educators (PHIVE- O) at Hastings College. Junker is responsible for the administration for both the Youth Risk Behavior Survey and the School Health Profiles for Nebraska and is instrumental in the production of the following two data documents: “State of Nebraska, YRBS Survey Results” documentation and the “Nebraska Adolescents…Keeping Them Healthy.” Junker is a member of the Nebraska HIV Care and Prevention Consortium, the Nebraska Substance Abuse Prevention Advisory Council for the Nebraska Department of Health and Human Services, the planning team for the Healthy Youth Nebraska Conference, the Interagency School Health Survey Committee (ISHSC), the Society of State Leaders of Health and Physical Education, the board of directors for The Bridge recovery house for women, the Nebraska AIDS Project and the League of Women Voters.

Mikaelah Molifua was born in Vista, California, to her parents Nielson and Dani Molifua. In 2001, the Molifua family moved to Lincoln, Nebraska, and stuck. In 2013, Molifua graduated from Lincoln North Star High School and continued her education at Hastings College. As an undergrad, Molifua cheered for the Broncos cheer team and lead the team as co-captain for three of her four years. She graduated in 2017 with a degree in English in Secondary Education. Not ready to venture into her own classroom, Molifua decided to continue her education and pursue her Master of Art of Teaching (MAT), K-12 Physical Education at Hastings College. She also was a volunteer assistant coach for the cheer and dance teams. During the summer of 2018, she became the head coach for those teams while recovering from a recent ACL repair and a later diagnosis of stage IV ovarian cancer. Now a 2019 MAT graduate, Molifua continues her love for coaching as the head cheer and dance coach while still battling cancer.