The Hastings College Broncos Forensics team moved ahead of the University of Nebraska–Lincoln as the second best forensics team in the state during the Nebraska Intercollegiate Forensics Association (NIFA) State Tournament on February 10. This marks the first time since 2012 that Hastings College earned the second place title at the State Tournament. 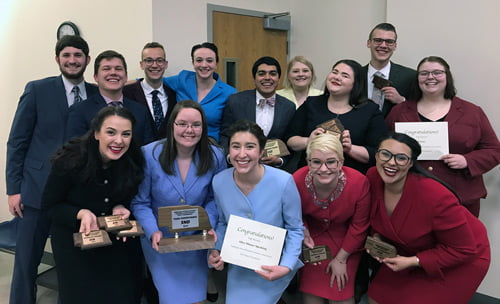 Andrew Boge, a senior from Johnston, Iowa, was one of two students from Nebraska chosen to represent the state in the National Interstate Oratory Tournament later this year. Interstate Oratory is a persuasive event in which the speaker has 13 minutes to examine an issue and provide solutions.

Carly Spotts-Falzone, a junior from Wayzata, Minnesota, was named as one of two “Spirit of NIFA” recipients. This honor is awarded to forensics students who represent the kindness, passion and love the Nebraska collegiate circuit prides itself on.

The team placed 18 individual speeches into finals from the preliminary rounds, an unusually high number for a competitive tournament like the Nebraska State Tournament.

The three Bronco seniors — Boge, Kenzie Shofner and Caleb Merritt — were also recognized for their dedication to the activity of forensics.

The Hastings College forensics team will host the Bronco Bash tournament this coming weekend on February 17 and 18 in the Morrison-Reeves Science Center. Rounds will run from 9:00 a.m. to 5:00 p.m. both days. The event is open for a public audience, and admission as a spectator is free. For more information, contact Dr. Kittie Grace, director of forensics, at kgrace@hastings.edu.

Individual results from the NIFA State Tournament are below.

‪The Hastings College forensics team continues a long-running tradition of national competitive success, placing in the top 20 at the American Forensics Association National Individual Events Tournament (AFA-NIET) for many of the past ten years. Most recently, Hastings College placed 12th at AFA-NIET 2017.