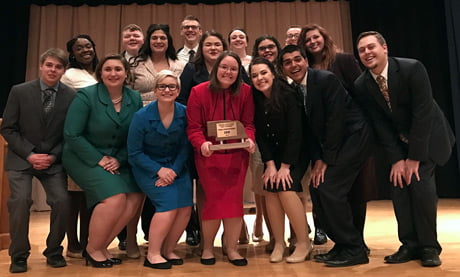 NIFA draws schools from all over Nebraska in attempt to win the coveted state championship. NIFA is notoriously known for being a tough competition, as Nebraska harbors a breadth of talent that is spread across the state with eight schools traveling to compete. Additionally, the state continuously is represented in the list of Top 20 schools at the American Forensics Association National Tournament, with four teams being in the Top 16 last year .

At this year’s NIFA, the Hastings College Broncos had the following results:

Carly Spotts-Falzone, a sophomore from Wayzata, Minnesota, placed 1st in Program Oral Interpretation, 1st in Duo Interpretation with Eunice Adounkpe, a senior from Omaha, Nebraska, and 5th in Dramatic Interpretation.