The $8.5 million facility to house Art Department, engage community in celebration of art.

Soon after Don Jackson ’70 became President of Hastings College, student Jackson Dinsdale met with him – first to introduce himself and then to discuss an issue about which he felt very strongly. 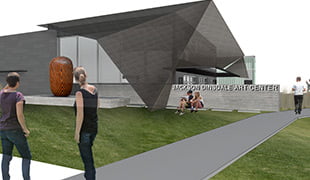 “Jackson said, ‘Don, the art department is in really bad shape. I know you know that, but we need to do something about it,’” said President Jackson.

Discussions and fundraising for renovations to the current facility, first built in 1908 to serve as the College library, were underway in May 2014 when Dinsdale, a Grand Island, Nebraska native, died unexpectedly.

The $8.5 million state-of-the-art facility will sit at the corner of 12th Street and Elm Avenue, just north of the Gray Center for Communication Arts. Among the 25,000 square foot building’s features are expanded studios for glassblowing, painting, sculpture production, painting and ceramics along with individual studio space for students. Additionally, the design includes critique rooms, a media room, classrooms and gallery space – all designed to facilitate engagement among K-12 school groups, the broader community and Hastings College’s art programs.

“I just can’t imagine how excited Jackson would be if he could see what the plans are now,” said President Jackson. “It’s going to be everything he could dream of 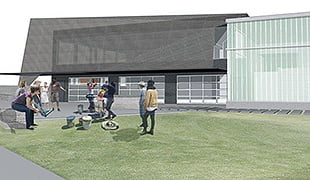 “Jackson was a generous person. He loved to share what he had with others and to bring together good people,” said Beaman, a senior art major who first met Dinsdale in kindergarten at Grand Island’s Gates Elementary School. “Now he’s giving us this building for that purpose.”

To demonstrate its support for the Jackson Dinsdale Art Center, the Hastings College Student Association Executive Council voted to contribute $21,000, which will be drawn from the student government’s capital improvements fund.

“Students are really excited about having a new facility on campus,” said Theresa Droege, Student Association Vice President. “Many of us knew Jackson and see this gift as a great way to honor his life and make a lasting contribution to the College.”

With $1.5 million yet to be raised for the project, the College is seeking donors to help complete the Jackson Dinsdale Art Center by August 2016. For more information, go to hastings.edu/ArtCenter.

Hastings College is a private, four-year institution located in Hastings, Nebraska, that focuses on student academic and extracurricular achievement. With 64 majors and 15 pre-professional programs, Hastings College has been named among “Great Schools, Great Prices” by U.S. News & World Report, a “Best in the Midwest” by The Princeton Review and a "Best Bang for the Buck" school by Washington Monthly. For more, go to hastings.edu.​