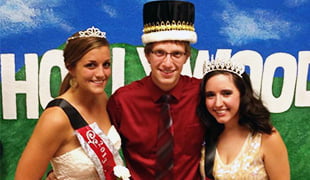 Selected by a vote of the student body, the Hastings College Homecoming finalists are in their junior year. The royalty were announced at a dinner on Friday, September 20 in Hazelrigg Student Union.

Throughout the week, students have enjoyed competitions among members of various organizations and students living in residence halls, including bed races, skits, and a campus banner competition.

Brooke Ballou, an agribusiness and marketing major from Wilsonville, Neb., is the daughter of Colleen and Brent Ballou. She is involved with Alpha Chi academic honorary and was named the Alpha Chi Most Outstanding First-Year Female Student. She has been involved with the Collegian student newspaper as the director of advertising and with HCTV as a news anchor. She served as Taylor Hall Resident Assistant and an Apartment Resident Assistant. Brooke has been involved with the Public Relations Ambassadors, and she currently serves as co-chair for the Artist Lecture Series Student Symposium and on the Student Association Executive Council Dance Committee and Communications Committee. She is the Chief Financial Officer of Professional Business Leaders and the Promotional Director for Food4Thought. Additionally, Brooke is an ambassador for Nebraska Education Quest.

Ellie Clinch, an economics and marketing major and Spanish minor from Lincoln, Neb., is the daughter of Bobbi and Sam Clinch. She is a Dean’s List student who holds the number one spot on the Hastings College Women’s Tennis team in singles and doubles. She is on the Academic Affairs Committee, holds the position of Business Manager for HC Media, serves on the New Student Days Committee and the leadership team for Public Relations Ambassadors and is the Student Association Executive Council Parliamentarian. She was the named the Most Outstanding Executive Council Member and is a member of the international honor society in economics. Ellie is also a mentor for Big Brothers Big Sisters and the secretary for Food4Thought.

Jocelyn Delgado, a psychology major and English minor from Brighton, Colo., is the daughter of Jennifer and Tom Delgado. She has been involved with the Hastings College Choir for three years and the Hastings College Bronco Women’s Tennis team. She is also involved with Active Minds, the Multicultural Student Union, Chi Omega Psi sorority and Sigma Tau Delta English Honorary. Jocelyn won the inaugural Jack and Alice Marvel Endowed Scholarship, with emphasis in liberal arts, and was a program director and camp counselor at the Colorado Lions Camp for people with special needs.

Theresa Droege from Aurora, Colo., is the daughter of Sharon and Nick Droege.  A history and psychology major, she is Historian of the Hastings College Forensics team, Co-President of Alpha Omega sorority, Co-President of Active Minds and Secretary of the Inter-Greek Council. Additionally, Theresa is a member of the Student Health Advisory Council (SHAC), the Student Senate, the Professional Business Leaders, Food4Thought, the Public Relations Ambassadors and A Catholic Thing (ACT). Theresa has held leadership positions in residence halls and presented a paper at Academic Showcase.

Kara Geweke, an economics major and math minor from Ord, Neb., is the daughter of Kelly and Barry Geweke. A Dean’s List student, she is involved with the Student Alumni Ambassadors, and she served on the Presidential Inaugural Committee. Kara has been a Student Senator and currently serves as Student Association Secretary. She was a Resident Assistant at Altman Residence Hall and is the captain of the Crimson Spirit Dance Team. She is part of the Hastings College Women’s Choir and was involved with the theatre productions “The Good Person of Szechwan”, “The Seussification of Romeo and Juliet”, “The Club” and “Assassins” in various capacities, including Assistant Stage Manager and Choreographer. She was the Girls State Junior. Counselor in 2012 and interned with Bozeman (Mont.) Economic Development.

Rachel Miller, a biology and Spanish major from Greeley, Colo., is the daughter of Stacey and Ty Miller. A Dean’s List student, she played defense on the Hastings College Bronco Women’s Soccer team for two years and was a Resident Assistant at Babcock Residence Hall. Rachel is involved with the Fellowship of Christian Athletes, Revive and Beta Beta Beta Biology Honor Society.

Bethany Reed, an elementary education major and Spanish minor from Hastings, Neb., is the daughter of Kim and Mike Reed. She is a Dean’s List student who has been involved with the Christian Ministry Program and Alpha Phi Sigma sorority. She is part of the Chapel Band and is the Alpha Phi Sigma Pledge Trainer and Gamma Representative.

Ida Rose Sprague, a psychology major and Spanish minor from Cozad, Neb., is the daughter of Rose and Phillip Sprague. She is a member of Public Relations Ambassadors and served as Member-at-Large on the Babcock Residence Hall Council. She is a three-year member of Alpha Delta Alpha sorority and a two-year member of the Hastings College Bronco Women’s Golf team. Ida serves as Rush Chair for Alpha Delta Alpha and was 2013 Ms. Bronco.

Sarabeth Swift, a human resource management and psychology major from Grand Island, Neb., is the daughter of Cathi and David Swift. She is a Dean’s List student who has participated in the Entertainment Arts Ensemble and is a member of the Hastings College Choir and the HC Bell Choir. She took first place at the National Association of Teachers of Singing competition and is the First Presbyterian Church Chancel Choir Section Leader. She is involved with Revive, Food4Thought and Alpha Chi academic honorary. She serves as Vice President of Selections for Omicron Delta Kappa Leadership Honorary and Treasurer for the Student Association.

Halee Wright from Hastings, Neb., is the daughter of Shelly and Kevin Wright. A three-year member of the Hastings College Bronco Women’s Soccer team, she coaches indoor soccer in Hastings. Halee is majoring in elementary education, early childhood education and English as a Second Language (ESL) education.

Eric Anttila, a physics major from Highlands Ranch, Colo., is the son of Cherie and Dave Anttila. He is a Dean’s List student who plays for the Hastings College Bronco Baseball team. Eric also volunteers with Kids Against Hunger and has won the Brad Gillham Memorial Scholarship, the Harry James Physics Scholarship and the Madgett Physics Scholarship.

Alex Eisele, son of Oliva Wright and Thomas Eisele, is a computer science major and math minor from Greeley, Colo. He is an IT Help Desk Technician. Alex, a Dean’s List student who won the Alpha Chi Most Outstanding Sophomore of the Year, is a member of Student Senate, Omicron Delta Kappa Leadership Honorary, Inter-Greek Council and SEAC. He is Co-president and Co-founder of Pi Rho Sigma Leadership Fraternity and Co-Chair of the Artist Lecture Series Student Symposium, and he previously served as President of the Multicultural Student Union.  Alex has worked as a sound designer and projectionist in several Hastings College Theatre productions and plays on the Hastings College Men’s Golf team. He was also part of the U.S. State Department’s Virtual Student Foreign Service Program.

Joel Holmquist, the son of Hugh and Brenda Holmquist, is from Burwell, Neb. He has been active in the Public Relations Ambassadors, the Student Association Executive Council, Fellowship of Christian Athletes, Revive and the Hastings College Bell Choir. He served as Treasurer for the Artist Lecture Series Student Symposium Committee. A biology major, Joel is a member of Beta Beta Beta, the biology honorary.

Michael Hull is seeking a Bachelor of Music in music education and trumpet performance. He is the son of Renae and Jerry Hull and is from Hastings, Neb. A Dean’s List student, Michael has been the principal trumpet in the Hastings College Band for two years and played in the band throughout college. He has also been involved for three years with the Hastings College Choir, Jazz Ensemble and Men’s Choir as well as the Hastings Symphony Orchestra and the Brass Quintet. Michael performed in the pit orchestra for the musical production “Assassins”. He has also been Choir Conductor for First St. Paul’s Lutheran Church for two years and was an organist for Redeemer Lutheran Church. He is a member of Alpha Chi Academic Honorary, Omicron Delta Kappa Leadership Honorary, the Inter-Greek Council and the Nebraska Music Educators Association, and he was a Resident Assistant at Altman Hall . Michael served as the Vice President in Sinfonia and currently serves as President; he is also President of the Nebraska Music Teachers Association. He won the Gordon Ohllson Memorial Scholarship and is a Knappenberger Travel Grant Fund Recipient.

McKay Inman, a business and economics major and communications minor from Colorado Springs, Colo., is the son of Arlene and Steve Inman. He is a Dean’s List student who plays for the Hastings College Bronco Men’s Tennis team and was voted the 2013 GPAC Player of the Year. He was an Altman Resident Assistant for one year and currently serves as an Apartment Resident Assistant. McKay served as Treasurer for Pi Rho Sigma and was on the Inter-Greek Council, and he is also involved with Professional Business Leaders, Public Relations Council and Lambda Pi Eta Communications Honorary.

Quincy Johnson, the son of Dorothy and Blake Johnson, is from Oklahoma City, Okla. He is Captain of the Hastings College Bronco Football team and President of the Multicultural Student Union. He has been active with Tau Beta Alpha and Kappa Tau Phi fraternities, Team Against Bias, the Artist Lecture Series Student Symposium Committee and Fellowship of Christian Athletes. Quincy is majoring in Health Systems and serves in residence hall leadership positions.

Sebastian Lane, a biology major from Vancouver, British Columbia, is the son of Beverly and Jimmy D. Lane. A Dean’s List student, he is an executive member of the Student Association and Chair of the Concert Committee. He is also a two-year member of Beta Beta Beta Biology Honorary and was a member of the HC 1882 Club, which raised over $100,000 for Hastings College. Sebastian is a graduate of the Summer Medical and Dental Education Program at the University of Nebraska Medical Center, where he was also a member of the Student Advisory Board. He also coaches basketball at Lincoln Elementary and is the lead guitarist for his band, Ambur Lane.

Casey Molifua, son of Dani and Nielson Molifua, is an exercise science major from Lincoln, Neb. He is a Bronc Resident Assistant and Member of Bronc Residence Hall Council. Casey plays for the Hastings College Bronco Football team.

Matt Overmiller, a secondary music education major from Hastings, Neb., is the son of Susan and Tim Overmiller. He is a Dean’s List student who has been involved with the Hastings College Bronco Football team and Fellowship of Christian Athletes for three years. Matt is a member of the Student Education Association.