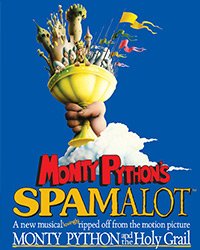 If you are looking for the perfect thing to do in January, the Hastings College Theatre Department has the Holy Grail for you. “Monty Python’s ‘Spamalot’”, a musical comedy based on the critically acclaimed film “Monty Python and the Holy Grail”, tells the story of King Arthur and his fellow Knights of the Round Table on their journey to discover the Holy Grail and prove that Arthur is the rightful King of England. Will they succeed? Or will they fall to the killer rabbits? Grab your coconuts, bring your friends and come see for yourself!

All tickets are $5 for all Hastings College students and seniors, and $7 for general admission. To reserve your tickets, contact tickets@hastings.edu.

Book and Lyrics by Eric Idle

THE LADY OF THE LAKE –  Karli Cabrera from Pawnee City, Nebraska