Indigenous leader and activist Winona LaDuke will speak about the importance of protecting water in her speech “Water is Life” on Tuesday, February 28, 2017, at 7:00 p.m. in French Memorial Chapel on the Hastings College campus. The lecture is free and open to the public. 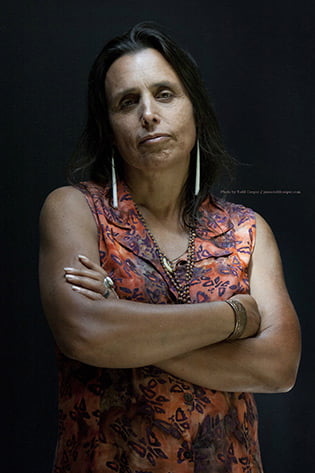 LaDuke has spent the past four years fighting the construction of different pipelines on native lands throughout the United States. She has become a prominent figure in oil pipeline protests in Standing Rock and is fighting to preserve water quality in the Missouri River.

A limited number of LaDuke’s new book, All our Relations: Native Struggles for Land and Life, will be available for purchase and signing.

Winona LaDuke is a rural development economist and author working on issues of sustainable development, renewable energy, and food systems. LaDuke’s work is primarily in the area of Indigenous Economics , Food and Energy Policy. She lives and works on the White Earth reservation in northern Minnesota, and is a two time vice presidential candidate with Ralph Nader for the Green Party.

As Executive Director of Honor the Earth, she works nationally and internationally on the issues of climate change, renewable energy, and environmental justice alongside Indigenous communities. In her own community, she is the founder of the White Earth Land Recovery Project, one of the largest reservation-based non-profit organizations in the country. She is also the co-founder (along with the Indigo Girls) of Honor the Earth, a grassroots environmental organization focused on Indigenous issues and environmental justice. Globally and nationally, Winona is known as a leader in the issues of cultural-based sustainable development strategies, renewable energy, and sustainable food systems. She is one of the leaders in the work of protecting Indigenous plants and heritage foods from patenting and genetic engineering.

LaDuke’s on the ground work includes the creation of Native Harvest, protection of wild rice and the restoration of traditional crop varieties, focused primarily on corn, beans, squash, melons and tobacco for northern agriculture. This work is documented in part, in a book Food is Medicine, available from Honor the Earth. Work on restoration of traditional corn varieties received significant support from the USDA Sustainable Agriculture Research and Education, and a number of private foundations. In 2015 -2016, LaDuke and Honor the Earth completed a Mille Lacs Band Tribal Food Plan including policy and implementation plans for the Mille Lacs Band of Ojibwe.

LaDuke’s work in renewable energy includes the completion of the White Earth Tribal Energy Plan and coordination of implementation work for solar and wind on the White Earth reservation, and with Honor the Earth and Solar Energy International installs on the Navajo and Western Shoshone reservations and territories.

In 2007, LaDuke was inducted into the National Women’s Hall of Fame, recognizing her leadership and community commitment. In 1994, LaDuke was nominated by Time magazine as one of America’s fifty most promising leaders under forty years of age. She has been awarded the Thomas Merton Award in 1996, Ms.Woman of the Year (with the Indigo Girls in l997) , and the Reebok Human Rights Award, with which in part she began the White Earth Land Recovery Project. The White Earth Land Recovery Project has won many awards- including the prestigious 2003

International Slow Food Award for Biodiversity, recognizing the organization’s work to protect wild rice from patenting and genetic engineering. LaDuke was a co founder, and Board Co Chair of the Indigenous Women’s Network for fifteen years, and maintains a significant role in international advocacy for Indigenous people. This has included numerous presentations at United Nations forums.

A graduate of Harvard and Antioch Universities, she has written extensively on Native American and environmental issues. She also attended one year at the Massachusetts Institute of Technology in the Community Fellows Program. The author of six books, including Recovering the Sacred, All our Relations. a novel- Last Standing Woman, and her newest work The Winona LaDuke. Chronicles. She is widely recognized for her work on environmental and human rights issues.