Jordan Dux, the Nebraska Farm Bureau Federation’s director of national affairs, is coming to Hastings College to discuss President Donald Trump’s economic and trade policies and their impact on Nebraska.

Student leaders of the College’s [AG]vocates, HC Democrats and HC Republicans worked to bring Dux to campus. They said they are hoping this event will help model how groups and individuals with differing views can work together for the betterment of Hastings College and the community. 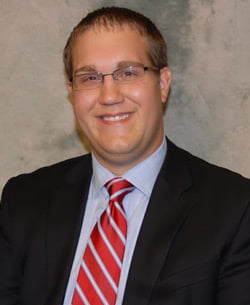 Dux grew up on a hog operation near Fairbury, Nebraska, and earned bachelor’s degrees in political science and religious studies from Doane College in 2007. Before arriving at Nebraska Farm Bureau, Dux worked on agricultural issues for Nebraska’s Third District Congressman Adrian Smith, and also spent time in Washington, D.C. working in the public policy department of the National Grange, the nation’s oldest agricultural organization. Dux has worked on numerous local and statewide political campaigns, including Mike Johanns’ Senate campaign.