On June 1, 2017, Hastings College will start a new era as Dr. Travis Feezell [fee-ZELL] becomes the College’s 17th President. The Hastings College Board of Trustees appointed Feezell, who currently serves as Provost and Chief Academic Officer at University of the Ozarks in Clarksville, Arkansas, to the position following a national search. Don Jackson, the current president, will retire at the end of the academic year after four and a half years in the office. 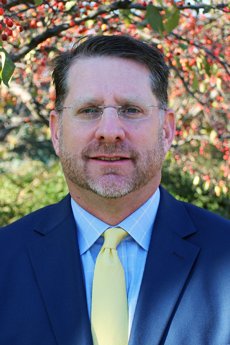 “When the presidential search committee began its search in July 2016, we sought a candidate who would embody the core of Hastings College’s mission and have the capacity to move the College forward to meet future students’ needs. Dr. Feezell is that candidate,” said Glen Moss, a 1974 Hastings College alumnus who serves as Chair of both the Board of Trustees and the Presidential Search Committee. “He believes in the value a Hastings College education can provide its students through outstanding classroom teaching and deliberate mentoring.”

Dr. Feezell, a graduate of Omaha (Nebraska) Central High School who went on to earn a Bachelor of Arts in English at the University of Wyoming, already has strong ties to Hastings College. His mother previously served on the College’s faculty, and his brother and sister-in-law are Hastings College alumni.

“The opportunity to serve as President of Hastings College is a special calling,” said Dr. Feezell. “I believe deeply in the impact of a residential liberal arts education and Hastings College is a model for that powerful experience. I am especially grateful for the opportunity to return to Nebraska and to lead an institution filled with so many talented and committed people. I knew Hastings was special when I applied but I am even more convinced about the unique place of this institution as a national leader in the future. I especially want to thank the Search Committee and the Board of Trustees for this opportunity but want also to thank President Jackson for his leadership and service over the past years. I and others will be the beneficiaries of the good work that has come before us.”

Moss expressed gratitude for all who helped with the search process.

“We set forth an ambitious timeline for identifying a new president and with strong support from the campus community, we met our goals,” said Moss. “I appreciate the service of those on the presidential search committee and of higher education expert Bob Dickeson who served as a consultant on the search. Additionally, I want to thank the students, faculty, staff and Hastings community members who provided key input on the finalists when they visited campus. Finally, I would like to acknowledge the tremendous behind the scenes logistical support of President Jackson’s tireless staff, especially Chief of Staff Alicia O’Donnell and Executive Assistant Nancy Beekman, as well as my gratitude for Don’s gracious contributions to the process and his continued service to Hastings College.”

Dr. Travis Feezell holds an Ed.D. in education from the University of Idaho and has 25 years of experience in higher education, including service as an academic administrator, faculty member, athletic director and baseball coach. Since 2014, he has been Provost and Chief Academic Officer at University of Ozarks. There he served as chair of a successful strategic planning process as well as co-leading the Enrollment Management Team to oversee increases in enrollment and retention. In addition, he initiated academic and governance changes at the four year liberal arts institution which, like Hastings College, is affiliated with the Presbyterian Church (USA).

Before joining University of the Ozarks, he served as a tenured professor as well as a special assistant to the president for strategic planning at Belmont Abbey College in North Carolina and helped lead the college through comprehensive strategic planning efforts. He was also awarded the Belmont Abbey College Spirit of St. Benedict Award in 2012, which is the highest award for service to the college, and the Adrian Faculty Excellence Award in 2011.

About the Presidential Search Process

To solicit applications, the presidential search committee developed a comprehensive profile of desirable characteristics in the next president and distributed the profile through advertising, online resources, and social media. Through a review and scoring process, the five person committee narrowed the list of 56 applicants to 19 candidates. After conducting reference checks, the committee selected eight candidates to invite for 90-minute personal interviews at the Dallas-Fort Worth airport on October 22-23. Four candidates were invited to campus for interviews in early November.

The Presidential Search Committee at Hastings College consisted of the following individuals: