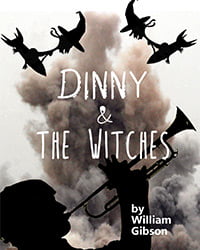 Hastings College’s Theatre Department will produce the rarely staged the show “Dinny and the Witches” by William Gibson. This play, a departure from the playwright’s best known work, “The Miracle Worker,” follows the story of an average, young, American musician named Dinny, as he aspires to attain success.

For the general public, tickets are $8.00, and for non-HC students and seniors, tickets are $5.00. Tickets for Hastings College students, faculty, staff and Crimson Connection members are free of charge.

With personal qualities including, ignorance, selfishness and greed, Dinny believes he deserves nothing but the best, will not give up until he achieves his goals and will not settle for anything less. When Dinny happens upon three witches, all of his wildest dreams are handed to him, leaving him to make a decision that will change the world.

This satirical play has comedy, a cast of Hastings College’s students, a live band and a performance full of excitement, this will show will leave you wanting more!

DINNY AND THE WITCHES