Hastings College media students are in Sioux City, Iowa, where they will spend the next week producing livestreams of the 2018 NAIA Division II Women’s Basketball National Championship running March 7-13. These students will also oversee the livestreams of the semifinals and championship games broadcast March 12 and 13 on ESPN3.

Hastings College media students have covered the tournament for the last 15 years. The first four years, students broadcast only games the Hastings College women’s basketball team played. In 2008, the National Association of Intercollegiate Athletes (NAIA) contracted with Hastings College to have HC Media students produce and stream all games but the semifinals and championship via the NAIA Network. In 2014 and 2016, respectively, the NAIA extended the contract to include the semifinal and championship games, which are carried on ESPN3. 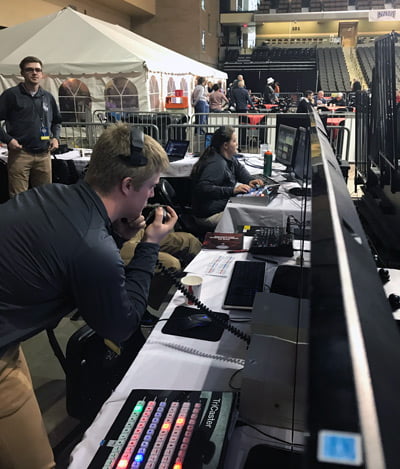 “As undergraduate students, we are honored that the NAIA continues to ask us to live stream the championship tournaments. It speaks to the quality of the program at Hastings College and its ability to prepare us to produce professional-level broadcasts,” said Jake Zink, the team’s student broadcasting director. “This is as real-world as it gets for students. We are thrown into the deep end of broadcasting eight games a day; it really gives you a taste for what the industry is like.”

In total, the HC Media students will produce 31 games over the six-day period.