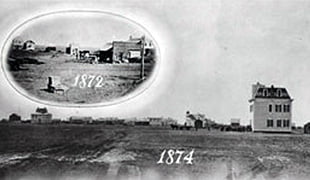 Hastings College was founded May 18, 1882, on 10 acres of treeless prairie on the east side of Hastings. This was and is one tough place for trees with storm, weather extremes, drought and wind. Ground was broken for McCormick Hall on April 25, 1883, and Frank Weyer declared, “What made it unique among ground breaking celebrations, however, was the tree-planting activity.” According to minutes of the Board of Trustees, “The people of the vicinity, including the ladies and the school children, assembled on the college grounds for the purpose of setting out trees.” Elinore Barber, College archivist, wrote that there, “…were several wagons piled with trees.” She recounts that 150 persons planted 226 trees representing 33 varieties on that one day.

The Hastings Weekly Nebraskan (July 19, 1883) reported that several thousand trees were planted that spring. Many of these trees were planted in areas adjoining the campus, such as the Heartwell Park tract on the north and University Avenue to the west. Many of these early trees were given by the Honorable R.W. Furnas, former governor of Nebraska and a Presbyterian elder, from his nursery in Brownville. The Hastings College arboretum with over 1000 trees and several gardens is testimony to the tradition of tree planting and care nurtured by countless dedicated professionals and volunteers from 1883 to the present.

Records are sketchy at best regarding the people who nurtured the Hastings College arboretum, but a few examples can be listed:

A Hastings Business Improvement District proposal was selected for participation in the Center for Landscape Stewardship program of the Nebraska Statewide Arboretum. Through this program the Peter Kiewit Foundation provided funds to purchase trees and shrubs for the Gray Center. Matching funds were given by the Hastings College Foundation, Hastings Rotary Club, Spotts Trust, Dutton-Lainson Company, and Earl May Nurseries of Iowa.

The Japanese Friendship Garden was installed in the courtyard on the east side of Hazelrigg Student Union in 1966. The Hastings/Arapahoe/ Ozu, Japan International Exchange Program sponsored the project.

The arboretum officially became a part of the Nebraska Statewide Arboretum in 1997 under the leadership of Lyle Fleharty, Director of Physical Plant Services. Accomplishments include:

These recent improvements to the Hastings College Arboretum will further encourage its use as an important educational resource for several Hastings College Departments, Hastings Central Community College, area K-12 students and the community in general. The goals listed below will guide our work:

If you have photos, stories and any information regarding the story of Hastings College trees, please contact Will Locke at Hastings College. If you wish to help with funding of replacement trees and particularly for new plantings contact Mike Karloff of the Hastings College Foundation.