Hastings College will welcome 68 students to campus as part of its Open Space for the Visual and Performing Arts immersion experience next week, with students from Nebraska, Colorado, Arizona and Iowa arriving on campus on Sunday, June 12, and participating in a variety of fine arts experiences through the morning of Saturday, June 18. 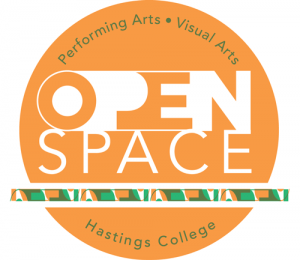 The immersion programs are designed for future artists, musicians, thespians, writers and speech competitors completing their sophomore or junior year of high school. It’s a tremendous way to expand the students’ hands-on experiences in the arts. Creative writing and speech are both new Open Space initiatives this year.

For the visual arts, a public showing of the students’ work will be open to their parents and the public during a gallery reception and brunch in the JDAC from 10:00 to 11:00 a.m. on Saturday, June 18.

Performing arts students will host a final public performance in Scott Studio Theatre from 11:30 a.m. to 1:00 p.m. on Saturday, June 18. It is also open to the public.

Hastings College’s art faculty selected 34 students to attend Open Space for the Visual Arts this year, and the departments of Music and Theatre and Languages and Literatures faculty selected 34 students for the performing arts track. Both were a competitive application process. Students will reside in the residence halls on campus during the experience and have social and civic opportunities to engage in the arts.

During the week, students will engage in hands-on applied learning, as well as gain individual time to create in the region’s preeminent art facility, the Hastings College Jackson Dinsdale Art Center (JDAC).

Students selected to participate in Open Space for the Performing Arts will join a group of their peers for daily rotating schedules that feature small groups and individual lessons, creative time and feedback.

Each student will spend time each day in their selected area-specific technique class, which includes small group sessions for woodwinds, theatre, voice, creative writing and speech.

Students from both groups will also participate in daily electives where they select their own course. Some electives are one day, and some go over multiple days. Electives for this summer include experimental music; famous portrait recreations, which includes painting backdrops, makeup techniques and period piece costuming; digital illustration and animation; abstract painting; how to talk in front of people; learning piano in three days, which presents basic skills of keyboard musicianship for the non-musician; one-minute sculptures; pinch pots and self concept; singing and vocal health for the non-singer; and how do you market yourself as an artist or performer.

Updates throughout the week will be posted at facebook.com/hcOpenSpace.

Students selected for Open Space for the Visual Arts include:

Students selected for Open Space for the Performing Arts include: