When animal law enforcement officer and 2015 Hastings College Graduate Timothy Rice catches a pet owner without a leash, he doesn’t issue a ticket. Instead, he offers a lesson on the dangers of off-leash pets, provides them with a free slip leash and sends them on their now law-abiding way.

For Rice, this is just one way to break the stereotype of “mean old dogcatcher.”

“I take this type of approach for a lot of violations,” Rice said. “It gives me the opportunity to educate the public on the law and resolve the situation without being a no-discretion ticket robot.” 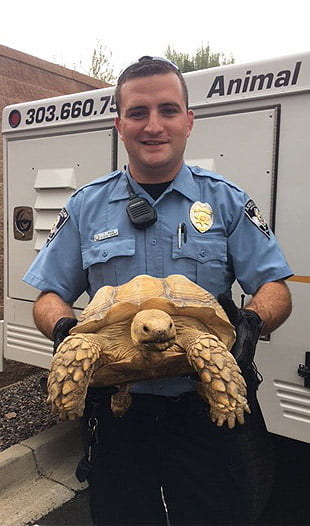 As corporal for the Douglas County Division, a certified state agent for the Colorado Bureau of Animal Protection and a member of the Humane Society’s Special Operations Response Team, Rice manages petty offenses, misdemeanors and felonies. Whether it’s a concern about a barking dog or a large-scale animal hoarding case, his responsibilities run the gamut.

“My favorite part of working with HSPPR ALE is that no day is the same, and I am not stuck in an office all day,” he said.

Among Rice’s most meaningful work days are those when he interacts with humans, not animals. When he isn’t administering to the Humane Society’s law enforcement needs, he visits schools, summer camps and county fairs to teach children about what animal law enforcement officers like him actually do.

“My presentations educate kids on why certain laws exist and what could happen if those laws are not followed,” Rice said. “If we can pass on a positive image of animal law enforcement officers to the youth, then they will hopefully grow up to respect the laws and officers.”

Rice sees education as the first step in establishing a more positive perspective of animal control. Educational initiatives, he said, can eliminate misleading stereotypes by highlighting how animal control promotes and protects the wellbeing of animals, people and communities.

“When you look at the initial need for animal control in America in the early 1800s, there was an epidemic of stray dogs with rabies. Local governments would pay drunkards and the homeless to rid the cities of these dogs by whatever means possible,” Rice said. “Animal control has since transitioned and developed to include qualified officers administering animal welfare, but there are still a lot of people who don’t respect the profession because of the poor stereotypes that exist.”

Rice’s mission to reinvent how the public views animal control and, in turn, the American criminal justice system developed prior his employment as an animal law enforcement officer. He said his first exposure to such ideas was within the classroom at Hastings College.

As an undergraduate, Rice learned about the structure of the American justice system, criminological theories and public perception of policing influences. He said his faculty mentors, Dr. Bob Kettlitz and Dr. Laura Logan, often took their lessons one step further by challenging Rice and his peers to critically evaluate the relationship between structure and perceptions.

“Dr. Kettlitz and Dr. Logan stressed the importance of seeking new and inventive ways to change the criminal justice system for the better,” Rice said. “They delved outside of the textbook and tried to inspire their students to create and maintain a positive light for the American social justice system.”

Rice uses resources like free slip leashes and educational outreach to reinvent the public’s image of animal control and improve community relations with HSPPR’s animal law enforcement officers. He views it as the initial step in improving the criminal justice system overall.

His unique approach helps share his positive perspective of a job which truly benefits animals and humans alike.

“My job gives me the chance to help the communities I serve in a positive way,” he said. “Everyday I put animal and humans in need of help into better and safer situations.”