Summer usually offers college students the promise of no homework, catching up with friends and some serious relaxation, but McKenna Reed spent the majority of her summer months in the classroom. Nearly 4,000 miles from home, the senior Spanish, elementary education and special education triple major used six weeks of her summer working as a teacher’s aide in a Peruvian school.

The opportunity to partner with teachers while abroad arose after Reed applied for the Casa Ayni Volunteer After School Program upon the suggestion of one of her influential Hastings College Spanish instructors.

“I went to Dr. Pedro Vizoso and explained to him that I didn’t have enough room in my schedule to complete my Spanish major unless I could get class credit over the summer. He introduced me to the Casa Ayni program, one that he had worked with many times before,” Reed said. “Just by poking around on their website, I saw that they had an after school volunteer program.” 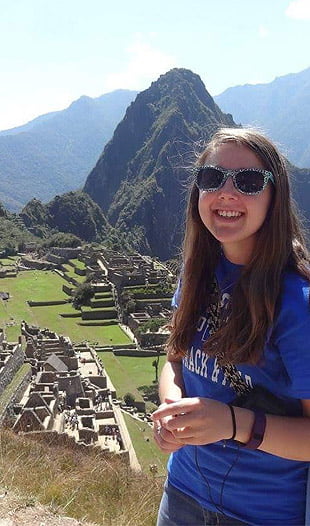 Reed promptly sent in an application and resume to Casa Ayni. Little did she know, her credentials and previous in-classroom experience — gained through curriculum at HC — would impress the director of the program, leading her to assume that Reed was already a teacher.

“I explained that I was not yet a teacher, but that I was training to be one. The next day she sent me an email saying that she had contacted a principal at a school, and that I was welcome to work there if that was something I would rather do,” Reed said. “I’m the first person that they have ever worked with like that, and I may have unintentionally opened up a gateway for other people.”

To pay for the trip, Reed received even more help from Hastings College through the Knappenberger Fund. This scholarship, established by a family with strong ties to the College, covered the costs of the Casa Ayni program, as well as a portion of Reed’s travel budget. The financial help derived from the Knappenberger allowed Reed to experience more than just one discipline while abroad.

“With the Knappenberger Fund, I didn’t have to do any personal fundraising to afford the trip. It was a God send because that meant that I had enough money to go to Machu Picchu and take a tour around different Incan sites. I’m not a history major, but I am still a history dork,” Reed said.

The trip to Peru wasn’t all fun and games, however. Reed actually began working in the classroom after just the second day of her six-week venture, and was required to speak only in Spanish. Though she initially felt prepared to use the language she had studied for three years at HC, on the spot translating turned out to be more difficult than she thought.

“Absolutely no one in the school spoke English, so I was kind of terrified my first few days. It became a lot of charades and learning how to describe something without using the actual word for it because I didn’t have it at my disposal,” Reed said. “The weirdest thing was that kids would ask me for help, and I would have to go ask the teacher because even though I knew the answer in English, but couldn’t say it in Spanish.”

Reed adapted quickly, learning a majority of the essential “classroom Spanish” that she needed to effectively work as a teacher’s aide.

“I was exhausted at the end of every day for having to focus so hard on how to say every single word, but then I started to get more comfortable with it and I settled into a routine,” Reed said. “Now that I’m back, I sometimes find myself quietly translating the word that I’m saying into Spanish in my head, even though I don’t need to anymore.”

Understanding culture in the classroom 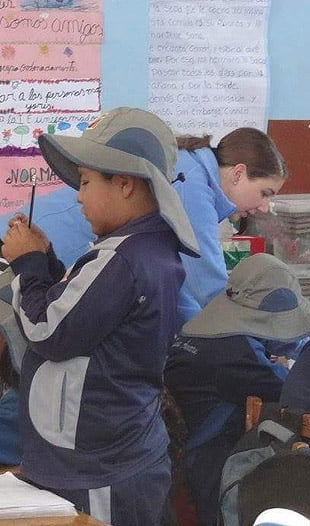 Reed returned to the states with an enriched understanding of not only the language barriers, but also cultural barriers that foreign students face once they enter the American schools system.

“Here you are expected to sit down, be quiet and do your work. In the schools in Peru, students could get up and work with friends; it was way more lax,” Reed said. “For a child to move from that school system would be a very hard challenge for them. These students are in a completely different place; classmates don’t look like them, classmates don’t talk like them and the disciplinary expectations are way different.”

After spending only six weeks emerged in the culture of a new school system, Reed began to apply the differences to her previous experiences. She was even able to revise her thinking on a student she worked with in America that originally hailed from Guatemala.

“After having worked in a Peruvian school, that little boy’s behaviors make way more sense. He wasn’t misbehaving to be naughty, and he wasn’t doing it to get a rise out of the teacher. It was just how he had been able to act in school up to that point,” Reed said. “I guess I never would have realized that had I not gone to Peru and seen how another school system is. I feel like having that insight is going to make me a much more understanding teacher.”

Reed hopes to share her experience during HC’s Academic Showcase Day this year as a way to shed light on the cultural differences between schools from different countries, and why it should matter to teachers.

In the grander scheme, Reed plans to graduate from Hastings College and earn her teaching license. She envisions teaching abroad as a major part of her future, and hopes to dedicate her summers to working in schools from other countries when she is not in the classroom in the United States.