As someone who didn’t complete high school, breaking away from bad habits as a student was a challenge for Maxwell Nyce. Yet Nyce made it to Hastings College, graduated in 2014 and has now entered into the competitive field of medicine.

He said because Hastings College is a place where professors get to know and support students, they reached out to him and challenged him to do better. 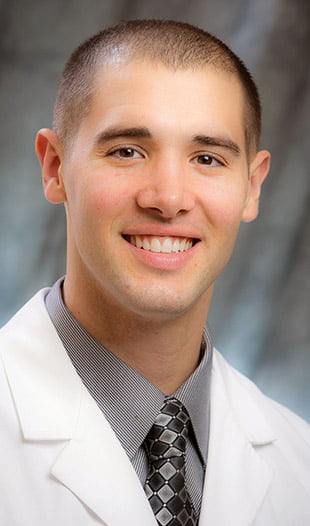 “Graciously, the professors at Hastings College worked with me,” said Nyce. “Through their encouragement, and at times tough lessons, I made it through a little better than where I started. As stubborn as I am, that is no small feat.”

At just 16 years old, Nyce became a certified nursing assistant. Soon thereafter, he joined the Army National Guard as a combat medic. Enjoying doing work in the medical field, Nyce decided to pursue a career in nursing and applied to Central Community College. While there, he did general coursework for two years. Ready to apply for nursing school, he realized he was three credits short. Instead of waiting another year, he applied to Hastings College.

From there, his interest in nursing evolved into becoming a physician.

The scientific understanding required behind practicing medicine is what Nyce said he finds appealing. Taking that understanding and applying it to improve or save someone’s life is what drew him to the medical field.

“For me, I can think of no better reason to go to work every day than to make someone else’s life better,” said Nyce.

Nyce graduated from Hastings College with a degree in biochemistry and molecular biology. Now, he’s attending the Kirksville College of Osteopathic Medicine (KCOM) in
Kirksville, Missouri.

KCOM has been a challenge for Nyce at times. He said the first two years of medical school are rigorous, with mountains of material to learn and tests to take. Seeking understanding in everything, working hard and being optimistic are ways that he keeps motivated to succeed.

“For students wanting to pursue a career in medicine, I highly encourage you to start preparing early,” Nyce said. “Know your options and be realistic. As my Hastings College advisor, Dr. Neil Heckman, said to me, ‘Have a plan, then have a plan B and a plan C.’”