The Hastings College Forensics team placed eighth in the nation at the American Forensics Association National Individual Events Tournament (AFA-NIET) in Colorado Springs, Colorado, beating more than 60 teams and 500 competitors. This is the highest finish at national for the Broncos since 2002, when the team placed ninth. Two members of the team were also named Forensics All-Americans, the 13th and 14th All-Americans in the program’s rich history.

AFA-NIET is held annually in April to brings students from across the nation together to compete for national championships in 11 events. Students reach the AFA-NIET through a rigorous at-large and district qualification system verified by organizational officers. 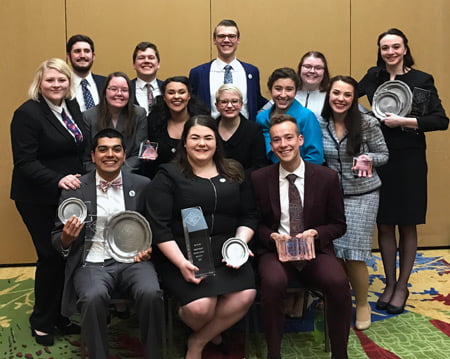 The Broncos Forensics Team sent 15 members to compete at AFA-NIET. Five of these students represented Hastings in quarterfinals, semifinals and finals.

Senior Andrew Boge of Johnston, Iowa, was one of the team’s two finalists. Boge placed second in persuasive speaking. He also represented the team as a semifinalist in communication analysis and a quarterfinalist in impromptu speaking. His performance earned him 20th in individual sweepstakes.

Shofner and Boge were also named All-Americans, a national award that recognizes 12 students who possess high competitive success, academic achievement and a significant focus on community service. Five of the 12 members of the All-American team were students from District Four, where Dr. Kittie Grace, head coach of the Hastings College team, serves as district chair.

Spotts-Falzone was named as the District Four Student Representative and will serve for the 2018-19 year. This position requires her to ensure students’ voices are heard at the national level of the American Forensics Association.

Students who qualified for nationals include:

‪The Hastings College forensics team continues a long-running tradition of national competitive success, placing in the top 20 at the American Forensics Association National Individual Events Tournament (AFA-NIET) for many of the past ten years.