The Hastings College Model United Nations team recently competed at its annual conference, the National Model UN Conference (NMUN), where it was recognized as one of the conference’s Distinguished Delegations. This award is presented to the top 10% of all teams that participate. 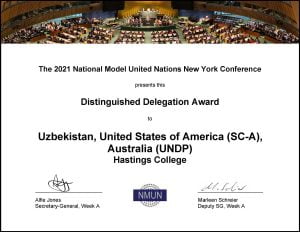 NMUN is usually held in New York City, but due to COVID-19 restrictions, the conference was held virtually. This did not stop teams from participating, as Hastings College students competed among thousands of other students from across the globe.

The Model UN team, which is coached by Dr. Sabina Hilaiel, negotiates with other delegations on each committee to compose resolutions so as to attract as many signatories as possible, all while trying to reflect the real-world policy preferences of the country they are representing.

Team members this academic year include: