The Hastings College student a cappella group Millennial Vibe is moving on to a regional International Championship of Collegiate A Cappella (ICCA) competition after finishing second at a district competition in Lincoln February 10.

The regional competition is in Phoenix, Arizona, March 31. 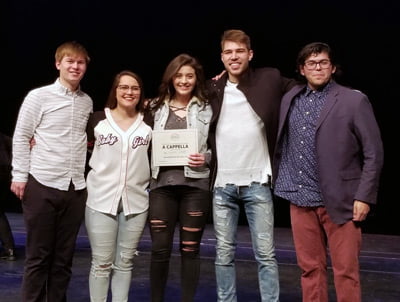 To compete in ICCA’s district competitions, students had to submit an audition video and be selected to participate. Nine groups made the cut – with two of those groups being from Hastings college: Millennial Vibe, a five-member a cappalla group, and 1-2-5, a men’s a capella group that had had 13 of it’s 15 members at the competition.

The Hastings College groups competed against student groups from much larger schools, and most groups had 18 to 30 members. A student group from Rice University in Houston, Texas, was first in the region and will also move on to nationals.

“Millennial Vibe took flight last August with five students wanting to challenge themselves musically, so to see them grow over the past few months and advance to Phoenix is really quite exciting,” said Dr. Byron Jensen, chair of the Hastings College Department of Music. “1-2-5 also did an excellent job in the competition. They have grown significantly in terms of harmonic accuracy, choreography and pure entertainment. Both groups are a joy to watch.”

ICCA gives singers in high school, college and beyond the opportunity to interact, compete, learn from each other, get feedback from the professionals and perform in fantastic venues around the globe. Top participants in ICCA’s regionals will move on to a national competition later in the year.