Hastings College awards a limited number of scholarships starting at  $500 to first-year students meeting the qualifications, so we encourage you to apply early. Scholarships are renewable each year.

The Rick Wilson Scholarship may be combined with other academic merit and talent scholarships but cannot be combined to exceed full-tuition.

To learn more about the Rick Wilson Memorial Scholarship, contact Lisa Markle at lmarkle@hastings.edu or 402.461.7781. 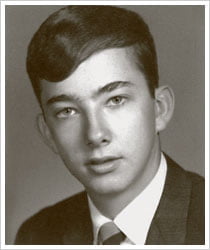 Hastings College is proud to award the Rick Wilson Memorial Scholarship in honor of Rick Wilson, a Hastings College student from Cozad, Nebraska, who died of leukemia during his freshman year in 1970. A 1969 graduate of Cozad High School, Rick Wilson was an outstanding scholar and member of the National Honor Society. One of two lettermen on the golf team, he also was active in music playing in the Pep Band, Symphonic Band and the All-State Band and singing in the Senior High Chorus. In his community, he was active in the Tri-County DeMolays, First United Methodist Youth Fellowship and 4-H. At Hastings College, Rick earned a perfect grade point average during the 1969 fall semester and was on the dean’s list.